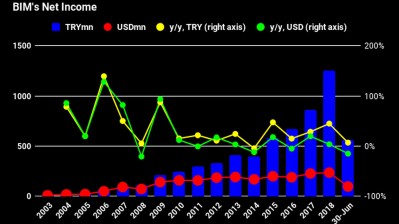 Turkey’s largest retailer BIM (BIMAS) on October 9 said it would call an extraordinary general meeting for November 11 to propose the distribution of a TRY243mn (€37mn) gross cash dividend from its extraordinary reserves, the company said in a stock exchange filing.

A sum of TRY24mn would be allocated as second legal reserves while a TRY0.40 gross, or TRY0.34 net, cash dividend would be distributed on December 11 in one instalment, if approval was given by the EGM.

On September 12, the company sold all of the TRY7.64mn nominally-valued shares, amounting to a 1.25% stake, that were repurchased via two separate share buyback programs, launched in July 2016 and May 2018. They were sold at a price of TRY48 per share.

“The Company does not have any treasury shares at hand and the sales gain amounting to TL 130,782,570 (excluding commission) will be presented in the equity of the Company IFRS financials,” BIM said in a bourse filing.

BIM will issue a total of TRY304mn worth of bonus shares and distribute TRY729mn worth of cash dividends from its 2018 profit, according to an approval given by the company’s general assembly on May 21.

Cash dividends are to be paid in two equal instalments. TRY1.2 per share as gross worth of the first payment was delivered on June 12.

According to the new capital structure, the second gross dividend payment worth TRY0.60, rather than the previous TRY1.20 per share, or TRY0.51 net, would be delivered on November 18.

There is no change in the total dividend amount and the total amount of the instalments.

In 2014, BIM pledged to distribute a minimum 30% of its distributable profits in upcoming years.

BIM’s average cash dividend yield for the 9-year period between 2010 and 2017 stood at 1.61%, according to Seker Invest’s calculations.

BIM also has an 11.5% stake in local footwear retailer Flo, which operates with a paid-in capital of TRY34.5mn.

BIM, which went operational with 21 stores in 1995, can not sell alcohol and pork products, according to Article 4.4 of its Articles of Association.

Mustafa Latif Topbas, CEO and co-founder of BIM, who doesn't give interviews, has a longstanding friendship with Turkey's president, Recep Tayyip Erdogan, and his family, according to Forbes.

Topbas’ daughter Fatma is married to Ali Ulker, nephew of food billionaire Murat Ulker, who hit the media headlines with a huge debt restructuring across 2018.

The Ulker and Topbas families also have business ties through their companies.

Ziylan Group is one of Turkey’s largest footwear makers. The company has the Flo, Polaris and Kinetix brands in its portfolio. It annually sells 20mn pairs of footwear through a network of more than 200 stores.

It was a surprise when the pro-Erdogan Ahaber title, directed by Serhat Albayrak, brother of Erdogan’s finance minister and son-in-law Berat Albayrak, harshly criticised BIM in March, prior to the March 31 local polls, for reporting a record profit in 2018.

During the local elections campaign, Erdogan accused local retailers of treason for hiking prices, but since the polls the government and retailers have agreed on a discount scheme.