Tide turns against hydropower investment in the Balkans 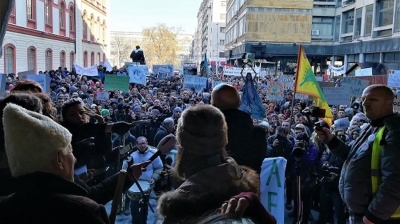 At the end of January, about 6000 people protested in Belgrade against the planned construction of hundreds of hydropower plants in Serbia.
By Clare Nuttall in Glasgow February 28, 2019

Hundreds of new hydropower projects are planned in the Western Balkans, as investors sought to take advantage of the huge and relatively untapped water resources in the region. Now, however, public sentiment is turning against these investments and several have been cancelled or put on hold.

In the latest development at the end of February, after thousands of people protested in the Kosovan city of Peja over plans for a series of hydropower plants on the Lumbardhi river, Prime Minister Ramush Haradinaj ordered an immediate halt to construction pending a comprehensive assessment of the scale and impact of the project.

“After the protest of citizens in Peja and legitimate concerns raised at the meeting by representatives of the community about the construction of hydropower plants in Lumbardh, from the ministry responsible I have requested the immediate cessation of procedures until a clear and comprehensive overview of the impact and scale of this project on the environment has been carried out,” the prime minister wrote on his Facebook page.

Pristina has pledged to develop the country’s hydropower potential, as it aims to boost the share of renewable generation to 25% by 2025. However, plans to develop water resources in national parks have met with strong resistance. The Peja protest followed smaller scale protests last week in the mainly ethnic Serb municipality of Strpce against the construction of a mini hydropower plant.

The environment, as it affects people’s health and livelihoods, has proved an effective way of mobilising people, and several governments have been more responsive to this type of protest than those with a more purely political motivation. The decision to halt work at Lumbardh follows, for example, the Russian government’s action following protests over poor landfill sites that symptomized people’s general dissatisfaction with their standard of living.

With around 3,000 hydropower plants in the pipeline or already under construction between Slovenia and Greece, according to a report from the Save the Blue Heart of Europe campaign group, protests have taken place in several countries in the region, most concerning investments into national parks and other protected areas.

Around 6,000 people protested in the Serbian capital Belgrade on January 27 over concerns that the planned construction of hundreds of hydropower plants in the country will damage the environment. The Serbian authorities plan to build more than 850 hydropower plants, about 200 of which will be within nature reserves such as national and natural parks. In Bosnia, a campaign to block construction of the planned hydropower plants Kruščica 1 and Kruščica 2 has occasionally erupted into clashes between villagers and police.

Opposition to the wave of investments into hydropower in the region has been mobilised by the Save the Blue Heart of Europe group as well as local campaign groups.

Governments in the region are in a tricky situation. As members of the Energy Community, the EU aspiring Western Balkans countries have adopted targets to boost the share of renewables in their energy mix as part of their ongoing integration with EU energy policy.

Their starting positions are mixed: Albania outstrips all EU member states since virtually all of the energy it produces is already from hydropower, a renewable resource. On the other hand, several of the Western Balkans states rely heavily on coal, which has raised concerns about the polluting impact on the region and the wider continent, and there are numerous new coal fired power plants, most of them Chinese funded, in the works.

Yet environmental groups say the shift towards more hydropower investment is also problematic, especially when new dams are built in until now untouched rivers such as the Vjosa in Albania, considered the last major “wild river” in the continent. A study published by environmental NGOs at the end of 2018, claims three quarters of the rivers in the Balkans are ecologically so valuable, they should be completely off limits for hydropower development. Yet, according to their "Eco-Masterplan", 89% of all planned hydropower projects are located in “no-go areas”.

“This is another step in our long fight against the hydropower projects on the Vjosa River. We are convinced that the Albanian Government is breaking not only Albanian law but also its commitment to the Energy Community. The hydropower projects ‘Kalivaç’ and ‘Poçem’ are not even economically viable, as social and environmental costs are underestimated,” said Olsi Nika from EcoAlbania in a February 26 statement.

A 2018 European Bank for Reconstruction and Development (EBRD) report stresses the importance of switching to hydropower, renewable energy sources and gas from coal to reduce pollution. While the region could further develop its hydropower potential, it is not reliable enough to guarantee the countries meet their annual power generation needs, according to the report.

“Perhaps the most promising opportunity lying ahead is regarding other renewable energy sources, such as wind, solar, and sustainable biomass. Their technology related costs have come down dramatically and they can now be present as an important low cost alternative to more traditional sources of energy,” the EBRD said.

Overall, progress in investing into new forms of renewable energy in the region has been slower than expected. This resulted in the submarine power link from Montenegro to Italy having its capacity halved to 500 MW due to the slower than expected pace of construction of renewable energy projects in the Balkans. The delayed launch of the transmission line is now expected this year.

Wind power investment is now gathering pace in the region. Fintel Energija, the Serbian subsidiary of Italy's Fintel Energia Group, said in early February that it plans to start the construction of Europe's largest wind farm in Serbia this year. Fintel is also expected to complete the first phase of another wind farm project in Vojvodina, the Kosava farm. Meanwhile, in neighbouring Montenegro state power firm EPCG will launch the construction of the 50 MW Gvozd wind farm that is estimated to cost €70mn in 2020.

There are also a handful of significant solar investments in the pipeline in countries such as Albania, for example. In November, the country selected a group led by India Power Corporation to build a 100 MW solar park worth €70mn. The following month, the energy ministry announced that an Albanian unit of Norway’s power company Statkraft — which is already active in the country’s hydropower sector — has applied to build a floating photovoltaic plant in the central part of Albania. Statkraft Renewables Albania will implement the project in Banje water reservoir in Elbasan county, using highly innovative technologies.

Albania to raise up to €700mn with new eurobond issue

Country looks at natural gas as a transition fuel, but building a nuclear power plant may become an inevitability despite public’s misgivings.

Russia’s Team Spirit has triumphantly lifted the Aegis of Champions. The team of five youngsters – the oldest of them only 23 years of age – has won $18.2mn, the biggest prize in eSports.

After ranking second in the EU two years ago, production has now sunk back amid rising costs and legislative hurdles.