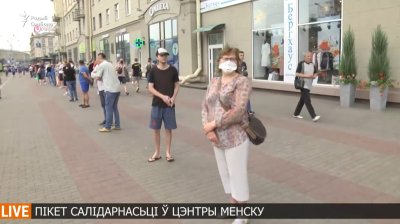 Thousands of protesters took to the streets in Minsk after Belarus law enforcers detained ex-banker Viktor Babariko, who is Lukashenko's main rival in the upcoming presidential elections.
By bne IntelliNews June 19, 2020

Thousands of anti-government protesters spontaneously formed a line around four-five km long in central Minsk in the evening on June 18 following the detention by Belarusian law enforcers of Viktor Babariko, an outspoken critic of Belarusian authoritarian President Alexandr Lukashenko and who is going to participate in the August election.

The traffic police have blocked the city centre; however, there no reports of detentions of protesters so far.

On June 18, Babariko was taken in for questioning by officers of the Department for Financial Investigations at Belarusian State Control Committee (SCC). Later the same day, the SCC confirmed his detention over the investigation of his "illegal [financial] activities". Babariko's son and the head of his election team Eduard have also been detained on June 18.

Babariko collected 425,000 ballot signatures as of June 18, which is a record-high number for Lukashenko's rivals over the past two and a half decades. The necessary minimum is 100,000 signatures.

Last week, Belarusian law enforcers raided the headquarters of Belgazprombank, the local operation of Russian state-owned bank Gazprombank, as a part of their tax evasion investigation. Over the past two decades Belgazprombank was headed by Babariko.

On June 11, officers of the Department for Financial Investigations at the SCC raided Belgazprombank as a part of a tax evasion and money-laundering case. Suspects in the case included representatives of private companies, as well as former and current bank managers, according to the SCC.

Babariko stepped down from his post in May with the aim of taking part in the August presidential election campaign. Belgazprombank is amongst the top-five largest Belarusian banks by assets. On June 11, the lender's shareholders – Russian natural gas monopoly Gazprom and state-owned Gazprombank – declared their "full support" for the Belarusian operation.

Political tensions in Belarus have started to increase since the arrest of Sergei Tsikhanovski, a nationally known popular blogger who is critical of the Belarusian authorities, on May 29. He was arrested while he and his supporters were collecting signatures in support of his wife’s presidential bid in the western city of Grodna.

On June 1, four Belarusian human rights groups declared that the detained Tsikhanovski was a political prisoner and demanded his immediate release. In May-June, Belarusian law enforcers detained or arrested hundreds of anti-government protestors, activists and journalists in different regions of the country.