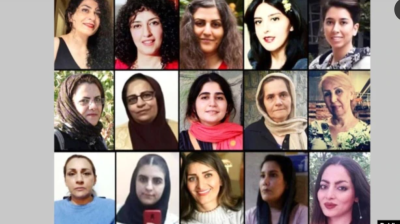 Female political prisoners incarcerated in Iran's notorious Evin prison have published a letter expressing concern about the issuance and execution of death sentences for those arrested in the protests. / public domain
By bne IntelIiNews December 13, 2022

Courts in Tehran have sentenced 400 people arrested at anti-regime protests to prison terms of up to 10 years, according to the prosecutor-general in the Iranian capital.

A total of 160 "rioters" were sentenced to between five and 10 years, 80 to between two and five years and 160 to two years or less, the prosecutor-general, Ali Alqasimehr, said, according to a December 12 report from Mizan news agency. Another 70 were fined, he added.

The announcement of the sentencing comes a day after authorities publicly hanged a second man convicted over his claimed role in the unrest. Photographs carried by local news outlets showed Majidreza Rahnavard, 23, hung from a crane in the northeastern city of Mashhad. A Revolutionary Court had convicted him of "enmity against God" after finding he stabbed to death two members of the paramilitary Basij force. Amnesty International said he was subjected to a sham trial.

So far, at least 490 protesters, including 68 children and 62 security personnel, have been killed during the unrest, according to the Human Rights Activists' News Agency (HRANA).

The protests have lasted more than three months, during which time, more than 18,200 people have been arrested in connection with the unrest and 1,024 charged, HRANA added.

Amnesty has compiled records showing that to date 11 of the arrested individuals have been sentenced to death.

One of those is 26-year-old professional footballer Amir Reza Nasr Azadani, who a judiciary official in Isfahan province said on December 11 had been charged with "baghi", or "armed revolt". Nasr Azadani is accused of killing three security personnel in the city of Isfahan during protests on 16 November.

The global football players' union FIFPRO said on December 12 it was "shocked and sickened" that he was facing a possible death sentence "after campaigning for women's rights and basic freedom in his country".

The BBC reported that prominent former Iran national team player Ali Karimi, who has backed the protests, tweeted: "Do no execute Amir."

RFE/RL reported on December 13 how female political prisoners incarcerated in Iran's notorious Evin prison have published a letter expressing concern about the issuance and execution of death sentences for those arrested in the protests.

Separately, Al-Monitor reported on December 12 that leaders of Israel’s intelligence-security community are mostly united in their assessment that Iran’s nationwide protests are not a fleeting phenomenon, unlike previous waves of anti-government protests in the past 40 years.

“Present-day Iran is not the Iran of 10 or five years ago, nor of the past year or even three months,” a senior Israeli security source told Al-Monitor on condition of anonymity. “What is going on there now is deeper, broader and irreversible.”

Former deputy defence minister Brig. Gen. (Res.) Ephraim Sneh was reported as describing the situation as “chronic", saying: "This is no longer a local upset or passing illness. What we are seeing is changing the face of Iran and there will be no going back.”

However, even Israeli optimists are said to be unwilling to place bets on a regime change in Tehran at this point. “The deep change Iran is undergoing will not necessarily result in a revolution and regime change. Right now, we do not see this happening in the foreseeable future,” the senior Israeli security source was further reported as saying, adding: “The regime still has many tools with which to defend itself and it has not exhausted most of them. We do see possible changes, concessions that the regime will have to make. On the one hand, it is hard for us to see an alternative to the current regime, on the other hand, what was will no longer be. The change in Iran is real.”