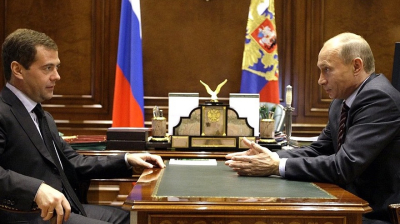 There is a general assumption that Dmitri Medvedev, the current prime minister, (pictured left) will be replaced next year.
By Mark Galeotti of the Institute of International Relations Prague November 15, 2017

Elections in 2018 are very unlikely to mean a new president for Russia, but they could see a new prime minister appointed. It is tempting to see this as of little real significance, like a choice of head butler to administer the president’s affairs. However, while the role is essentially to be presidential henchman and scapegoat, it is a role with meaning, and Vladimir Putin’s choice will be both consequential and also a potential indicator of the direction he plans to take in his fourth presidential term.

There is a general assumption that Dmitri Medvedev, the current prime minister, will be replaced next year. He has been a loyal factotum, even to the point of keeping Putin’s throne warm as president-in-name-only in 2008-12, but he has also become something of a liability. In part this is simply because his role means that every setback and scandal comes to his door. But it also reflects his own relative weakness as a manager, as well as the savaging this ostensible “Mr Clean” received in a now-notorious online video by anti-corruption campaigner Alexei Navalny, highlighting his alleged property deals and mansions.

That said, it may be too soon necessarily to write off “Dimon”. Choosing a new prime minister is, of course, potentially a very useful move for Putin. A new face can give the impression of a new direction, even while Putin himself appears increasingly detached from, and even bored by, the business of government. It also allows him to reward an ally or client, and maybe even groom a successor.

However, this is also a problem. Although no one seriously doubts that he will be standing in 2018 (expect an announcement during or around his regular marathon press conference on 14 December) and – spoiler alert – that he will win, people are already looking to life after Putin. For a leader whose legitimacy in part rests on the myth that he is the “indispensable man,” this is inevitably problematic. Anyone elevated to the premiership will inevitably become the focus of speculation about their presidential ambitions and prospects. Furthermore, this will likely trigger if not outright struggles, as least quiet jostling over access to power, opportunities for enrichment, and chances to settle scores.

Medvedev has, after all, several understated virtues. He is unlikely to be considered presidential material, except as a front man for an oligarchic coalition. He is not dangerous, has no mortal enemies within the upper elite, nor yet particular cronies. He is the safest of pairs of hands. Putin apparently promised him a full term as prime minister as honourable sinecure for quietly handing back the presidency, but if he opts to extend it, he will essentially be prioritising a quiet life, preferring to run the risk of looking tired and staid, than of opening up the questions of succession and change.

Alternatively, he may decide that the country’s serious economic challenges need a prime minister who can concentrate on them. The days when economist Alexei Kudrin was a plausible choice are probably gone; he would demand too much authority and pose too much of a threat to established interests such as the defence industries. However, both Minister of Economic Development Maxim Oreshkin and Central Bank chair Elvira Nabiullina have been posited as potential “prime economists,” competent enough to make a difference, yet not so confrontational as to trigger a war within the government on their first day.

Such a choice would indicate that Putin – whose level of knowledge of the real problems facing Russia is unclear, cocooned as he is by his aides and cronies – appreciates the primacy of the economic challenge, and is willing to see at least partial reform. Economic liberalisation to fund and maintain political control is a familiar (and often unmanageable) gambit in such circumstances, and would likely entail greater emphasis on the rule of law, as well as a gradual reduction in security spending, and also, ideally, and improvement in relations with the West.

A third option would be an essentially administrative premier, a tough manager whose job was not to implement new policies so much as to try and make the old ones work better. A figure such a Moscow Mayor Sergei Sobyanin, for example, would be entirely credible, but while in policy terms this would indicate continuity, such a figure – unlike the liberal “prime economists” – would also be considered a potential successor. This risks having a destabilising effect on the regime, and may be a step Putin is unwilling to take, unless he really is auditioning for an understudy.

This would especially be true were Putin to tap his defence minister, Sergei Shoigu. He has a reputation as a formidable organiser and motivator, not least given how he turned the Ministry of Emergency Situations from being one of the most corrupt and dysfunctional state structures into a strikingly effective one, as well as turning around the demoralised military. However, his reputation – he is consistently second only to Putin in public polls – and his unusually broad appeal means that he might make too strong a prime minister for Putin’s comfort. Even if he has no higher ambitions, it would be hard for Shoigu not to be touted as the next president, and for people to start drawing comparisons with the present incumbent.

One refinement would be to go for a figure such as Valentina Matvienko, speaker of the Senate, a former ambassador and governor of Putin’s home town of St Petersburg. She would fit the role of the manager-in-chief, with experience both within the legislature and in regional administration, but being both 68 years old and also a woman – polls this year showed only a third of Russians approved of the idea of a female president – she is less likely to be taken as a successor-in-waiting.

Finally, it might be a surprise candidate from the relatively unknown ranks of the governors and bureaucrats currently being tested for higher office, in which case it would be legitimate to think of them potentially even being road-tested for the highest job of all. However, it is unlikely that we will see that quite yet. If anything, it may be a reason to keep Medvedev in place for a year or two longer, while the latest crop of governors and the like show what they are made of. In this case, the focus will be on person, not policy, as Putin seeks to move to, most likely, some honourable “father of the nation” role from which he can protect his and his friends’ interests while unburdening himself of the responsibilities of the presidency.

Either way, and there are many other potential candidates, these kinds of choices illustrate that whatever the weaknesses of the prime ministerial position, Putin’s choice as to who holds it will say much about his priorities and concerns heading into his next term.