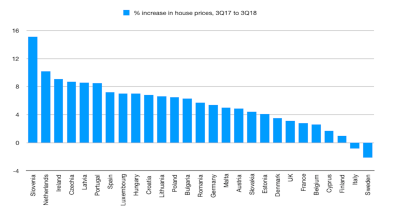 House prices in Slovenia rose 15.1% y/y in the third quarter of last year, accelerating from a 13.4% annual rise in the previous quarter, data from Eurostat showed on January 18. This was the highest annual rise in the EU for the July-September period.

The real estate sector has been strengthening in the past years. The number of real estate transactions rose 5% to reach a record 36,000 in 2017, according to the Mapping and Surveying Authority (GURS).

Demand for new properties is outstripping supply both in Ljubljana and in other cities in the country, and several major new construction projects have been launched in the capital.

On a quarterly basis, house prices in Slovenia rose 1.9% in the third quarter of 2018, slowing down from the 4.2% hike in the previous quarter.

COMMENT: Why the Balkan region should be on investors’ radar screens
US pledges up to €1bn for EU's eastern Three Seas region
Soaring COVID-19 cases in parts of Central and Southeast Europe force governments to impose new restrictions

Worst losing streak since 1999. Goading of EU leaders and daring US to hit Ankara with sanctions not helping amid the economic indigestion.

Economic development was mainly supported by the service sector and primary production, but their recovery also slowed in September, as real disposable incomes go negative again

The board of the Central Bank of Russia (CBR) at the second last policy meeting of 2020 on October 23 resolved to keep the key interest rate unchanged at 4.25%, in line with expectations.