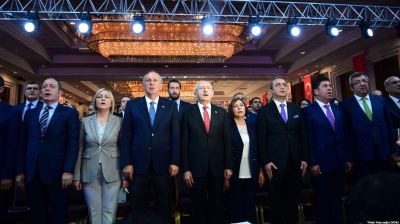 Capital notes that even if the opposition alliance led by the Republican People’s Party (seen here launching its manifesto) won the elections and shifted Turkey to more orthodox policymaking, the country would need interest rates to stay high for an extended period and fiscal policy to be tightened. / Yıldız Yazıcıoğlu.
By bne IntelliNews June 18, 2018

Capital Economics on June 18 revised its Turkey forecasts, noting that the sharp slowdown expected in the country now seems to be materialising.

“The economy is likely to experience a quarter or two of negative growth this year. A strong Q1 means that GDP growth will be around 3.5% over 2018 as a whole and we expect growth to slow further to 2.5% in 2019. That would be a much weaker performance than most currently anticipate,” Jason Tuvey, senior emerging markets economist at Capital, wrote in a note to investors.

Data released last week showed that the Turkish economy grew by a stronger-than-expected 7.4% y/y in Q1, up from 7.3% y/y in Q4 of last year. But the recent sell-off in the lira—down by around 20% against the dollar so far this year—and the cumulative 500bp of interest rate hikes delivered since late April “means this is all old news”, Tuvey said.

“The effects of a weaker lira will filter through over the coming quarters. Inflation jumped from 10.8% y/y in April to 12.1% y/y in May, a six-month high. It will rise further over the coming months, peaking at around 14.0% y/y in August. This will erode households’ real incomes and weigh on consumer spending,” he anticipated.

Any further move in interest rates will hinge on swings in the currency and Capital now thinks “that the lira will depreciate steadily over the next couple of years, to 4.8/$ by the end of 2018 and to 5.0/$ by end-2019. In this situation, the CBRT [Central Bank of the Republic of Turkey] will probably hold off from further rate hikes. But Turkey’s large external financing needs mean that the lira is vulnerable if global investor sentiment deteriorates again. In the event of a shock, the central bank could be forced to raise interest rates further.”

Past experience suggests that the tightening of financial conditions on the scale seen recently will trigger an abrupt economic slowdown, Capital concluded. Tuvey added: “Conditions are now tighter than they were during the euro-zone debt crisis in 2011. The fall in asset prices and higher debt servicing costs are likely to result in balance sheet strains. Credit growth looks set to slow and investment plans will probably be scaled back. In quarter-on-quarter terms, Turkey is likely to experience a quarter or two of negative GDP growth. Year-on-year growth will effectively stagnate towards the end of this year. For 2018 as a whole, we now expect the economy to expand by 3.5% (previously 4.0%), which would almost entirely reflect strong growth in Q1.”

Annual growth is likely to be around 2.5% in 2019 and 3.0% in 2020, Capital forecasting shows but its forecasts lie well below the consensus.

The June 24 parliamentary and presidential Upcoming elections will be the next flashpoint for the Turkish economy. “The latest opinion polls suggest that President [Recep Tayyip] Erdogan and [his ruling] AK Party are still on course to win but the race is tight,” Tuvey noted, adding: “If the polls are correct, the major threat would be that Mr. Erdogan pushes ahead with previous pledges to take greater control over monetary policy and urges the CBRT to lower interest rates. That would trigger a renewed sell-off in Turkish financial markets and, ironically, put pressure on the CBRT to hike interest rates. Even if Mr. Erdogan and the AK Party lose, it’s not clear that, in the short-term at least, the economy would be any better off. A proposed shift to more orthodox policymaking under the CHP [Republican People’s Party]-led National Alliance would require interest rates to stay high for an extended period and fiscal policy to be tightened.”