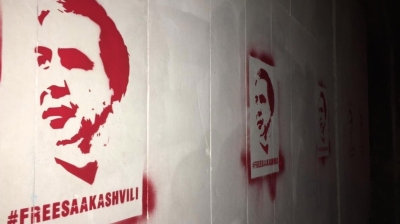 There’s rarely a dull moment in Georgian politics, but even by those lofty standards, October is already a month to remember.

As with so many events in Georgia, the past few weeks in the South Caucasus republic have centred on one man: Mikheil Saakashvili. The larger-than-life former president who headed the country from 2003 to 2012 has spent the past eight years in exile in Ukraine, during which time he both gave up his Georgian citizenship and was convicted in absentia of abuse of power.

Ever since, Saakashvili (or simply Misha, as he’s commonly known) has promised time and again to return to Georgia, always failing to follow through. Despite maintaining control of his United National Movement (UNM) – Georgia’s primary opposition party and the main challenger to the ruling Georgian Dream (GD) – Saakashvili had been forced to operate from abroad.

All that changed on October 1, when the ex-president abruptly posted a video from Georgia’s coastal city of Batumi, announcing he had at long last arrived in the country ahead of nationwide local elections the following day. A cat-and-mouse game with the ruling authorities ensued over the next hours, until a beaming Prime Minister Irakli Gharibashvili, head of the present GD administration, announced that Saakashvili had been arrested. A smiling Saakashvili was marched into a prison near the capital and the vote went ahead the following day.

Momentum then built slowly. Saakashvili announced a hunger strike, while several thousand supporters – a sizable, yet not overwhelming number – came out to protest for his release on October 4. The next week and a half passed calmly, until October 14. That day, UNM organizers gathered a truly massive crowd on Tbilisi’s Freedom Square. Tens of thousands of demonstrators, their numbers bolstered by provincial arrivals from other parts of Georgia, stretched out for kilometres down the capital’s Rustaveli Avenue, calling for Saakashvili’s release.

The largest demonstration in at least a decade in Georgia has set the scene for what should be a highly contested runoff vote on October 30 – but how much has it really changed the game?

For Georgian observers, the October 14 demonstration was far beyond expectations.

“[The protest] was the largest I have ever seen myself,” said Shota Utiashvili, a senior fellow at the Tbilisi-based Georgian Foundation for Strategic and International Studies. “Some people who were around in April 1989 [during the largest anti-Soviet demonstrations] told me it reminded them of back then,” he added.

“I would say there were 40,000, maybe even 50,000 people,” said Iago Kachkachishvili, director of the Institute of Social Studies and Analysis, a Tbilisi-based think tank. “It was certainly very different from past [UNM protests].”

The exact timing of Saakashvili’s return initially seems a bit surprising: at an election, but not one where he himself was on the ballot, as was the case most recently with the 2020 national election, when he was nominated by the UNM-led Strength in Unity bloc as their choice for prime minister.

Analysts see a weakening grip by the former president on Georgia’s political scene as the primary motivation. They argue the need to refocus the opposition around both the UNM and – perhaps more importantly – himself, played a major role in Saakashvili’s return.

“I was somewhat surprised by his return, but it had to happen eventually,” said Utiashvili. “As a politician, [Saakashvili] understood that the time where he could lead the Georgian opposition from abroad was ending. He had to either leave Georgian politics or come back,” he said.

“[Saakashvili’s] resources in Georgian politics were dwindling,” Kachkachishvili agreed. “He knew that his arrival would result in prison, but he could not do more from abroad than the current results,” where the UNM has traditionally received about 25% of the vote and rarely more. “He needed his supporters to see him in Georgia itself,” Kachkachishvili said.

Perhaps most crucially, the comeback has changed the perception of Saakashvili in some corners of Georgian society: from an exiled playboy to a political prisoner.

“Misha’s mode of political existence has changed now,” said Kachkachishvili. “He is the victim now, and Georgian society has a loyal attitude towards political victims. I think some people have started to shift their opinion of him from a violator [of human rights] to being the reformer, the creator of modern Georgia. People have started to respect him more for coming back to Georgia knowing that he would suffer, rather than continuing to live abroad in luxury,” Kachkachishvili explained.

By his return, Saakashvili has also posed a severe challenge to other opposition parties in Georgia, from the UNM-breakaway European Georgia to the upstart Lelo party and the For Georgia bloc of defected GD leader Giorgi Gakharia.

“Loyalty to Saakashvili has seemingly grown, not only among UNM supporters but also among those from other parties,” said Kachkachishvili. “It has further polarized society, which poses the largest challenge yet to GD’s rule but also makes it more difficult for other parties to survive. They have to tread carefully on the Misha issue now with so much support for him coming out, and their share of votes will likely diminish in favour of UNM,” he explained.

Saakashvili’s endgame, meanwhile, remains unclear. While his party now stands a strong chance of winning the mayoralties of most of Georgia’s largest cities (Kutaisi, Batumi, Rustavi and Zugdidi) and perhaps even Tbilisi itself in the second round of the local elections on October 30, it seems very unlikely at the moment that the UNM leader himself will walk free in Georgia anytime soon.

One likely possibility is that Saakashvili will be extradited to Ukraine, where he holds citizenship. Ukrainian officials have visited him in prison several times, and Ukrainian President Volodymyr Zelensky himself has lobbied for Saakashvili’s release.

“I think GD will send Misha to Ukraine,” said Utiashvili. “Keeping him in prison for years [Saakashvili’s current sentence is six years] is unimaginable as there is so much pressure, and the president pardoning him will not happen anytime soon. For Misha this is still not the best option [as opposed to walking free], but then he can at least say to his supporters and doubters that he did come,” Utiashvili said.

“What happens next depends entirely on the result of the second round of elections,” said Kachkachishvili. “If UNM can win some of the larger cities, especially Tbilisi, then the pressure from society on GD to release Saakashvili will be so strong they will either do it or allow his extradition to Ukraine. In that case, there could even be early parliamentary elections – and if that happens, who knows what could occur.”

Georgia’s exports went up by 25% y/y in June