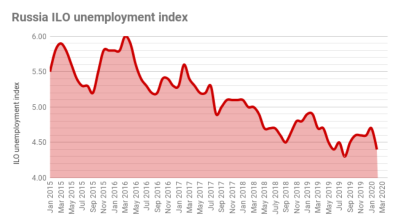 Russian unemployment could top 10% if lockdown lasts more than a month
By bne IntelliNews May 6, 2020

The number of unemployed people in Russia may grow to 5-7mn people in 2020 due to the stop-shock caused by the coronavirus (COVID-19) lockdown, Alexander Safonov, Vice-Rector of the Financial University under the Government of the Russian Federation, said in an interview with the state-run Rossiyskaya Gazeta newspaper on May 5.

If the lockdown lasts more than a month then it will lead to a wave of unemployment, according to the academic as cited by Tass.

"In the first month of self-isolation, employers used mechanisms that prevented massive layoffs. These are the so-called administrative holidays, when an employee has to take an unpaid leave," the expert said. Enterprises used such practice during the crises of the 1990s and 2008-2009, he recalled.

However, after a month of self-isolation, people who are now on unpaid administrative leave will have to start thinking about their future.

"If the situation with coronavirus is delayed for more than a month, then, of course, there will not be enough personal reserves, and it will be necessary to draw up a dismissal. Then we will see the second wave of unemployment growth," he said.

The economist has two scenarios of rising unemployment - optimistic and pessimistic.

"Currently there are approximately 70mn employed and 3.5mn unemployed in Russia, taking into account those who have not applied to the employment service. This is 5% of the employed. Under the optimistic forecast, by the end of the year the number of unemployed will grow by about 1.5mn people, up to 5mn. And this is about 7.3%," the economist predicts.

Under the negative scenario, according to the expert, unemployment can reach 7mn people, which will be 10.5% of the working population.

"Taking into account the factors working for us in the labour market - big employment in the public sector, the practice of enterprises to reduce labour and personnel costs instead of layoffs, administrative leave - an optimistic scenario will become possible and the number of unemployed will grow to a maximum of 5-5.5mn people," Safonov said.