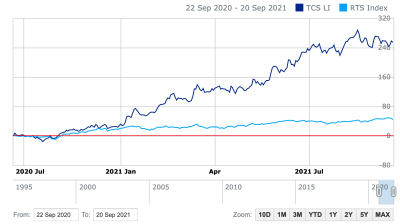 The stocks of Tinkoff, Russia's only purely online bank, have soared 250% in the last year alone as investors buy what is both a proxy to economic recovery and a fashionable Russian tech play. / wiki
By bne IntelliNews September 21, 2021

The founder of TCS Group Oleg Tinkov that owns Russia’s only purely online bank Tinkoff and the US Internal Revenue Service (IRS) have filed a petition to a court in California to approve an amicable agreement between them, according to TASS report on September 20.

Arguably Russia’s most successful commercial bank and an investors’ darling, as reported by bne IntelliNews, in 2020 the shares of TCS Group, the parent of Russia's only purely online bank Tinkoff, took a hit after the US government announced it was bringing tax evasion charges against Tinkov.

Tinkov, who is Russian but also held a US passport, was accused of concealing $1bn worth of assets, according to the verdict of the US district court. The sale of 11mn TCS shares at the IPO in October 2013 gained more than $199mn in gross proceeds, while Tinkov allegedly reported his income that year at only $205,317.

Now, reportedly, the settlement hearing with the IRS is scheduled for October 1, 2021. The details of the potential monetary settlement have not been disclosed at this stage.

Investors are watching the story closely as the share price performance of TCS Group has been a rollercoaster ride in recent years but has made investors a lot of money in the last 12 months.

The stock was floated at a price of $17 in 2013, but a year later got caught up in the panic selling following Russia’s annexation of the Crimea and fell to only $1. However, as the recession that followed started to fade away in around 2018 the stock price was one of the few in Russia to recover to its IPO level and was trading at around $20 by the end of that year as international investors started to buy the best “too cheap to ignore” stories again.

Following a fresh sell-off in 2020 caused by the double whammy of the coronacrisis and yet another oil price shock, the Russian equity market has come roaring back since the last quarter of 2020 as investors buy “back to work” stocks. The dollar-denominated Russia Trading System (RTS) index has gained 26% YTD but the bulk of investment has gone into the banking sector as a proxy for Russia’s economic recovery, which is up just over 60% over the same period. And TCS Group shares have been a standout favourite, as it gives exposure to both the banking sector and is at the same time a tech play that is extremely popular with investors at the moment.

TCS Group shares were trading at $91.82, up 253% year on year as of September 20. The shares of Sber (formerly known as Sberbank), another very popular banking stock, are up too, but by a more modest 53.3% over the same period. Most of the banking sector gains this year have been made by these two stocks.

The settlement with the IRS news are seen as positive for TCS, although "the stock is now much less dependent on Mr. Tinkov's personal circumstances than it was in February 2020, when TCS Group disclosed that Mr. Tinkov had been charged by the IRS," Sova Capital commented on September 20. The analysts maintained a Hold rating on the bank's shares.

Tinkov has been slowly withdrawing from the running of the bank and his other business after he announced he was undergoing treatment for leukaemia. Tinkov’s illness was not seen as high risk for the banking group by Fitch Ratings, as his role in the bank's management has been limited in recent years. Fitch viewed the strength of the management team as a positive factor for the bank's ratings.

Tinkov cut his influence on TCS when in January 2021 the Tinkov Family Trust converted 69.9mn Class B shares (with 10 votes per share) in TCS into Class A shares (each share with one vote). This equalised Tinkov's voting share with an economic stake of 35% (down from 84% before the conversion).

The move to convert the "super-voting" Class B shares into single-vote Class A shares was seen as a highly positive corporate governance step by the analysts, both removing a long-held bugbear of existing minority shareholders and ticking a key box in terms of bringing potential new investors into the stock.

The capitalisation of TCS recently topped $20bn, and despite tripling in value in the last two years, analysts continue to see a "decent upside" in the shares of TCS Group.

The bank toyed with a tie-up with Russian internet giant Yandex, which is on the hunt for a banking solution for its burgeoning e-commerce business, but TCS quickly shrugged off the failed $5.5bn deal last year. At the time the deal was announced Tinkov billed it as a “merger”, whereas Yandex said it was a “takeover.”

In the meantime, the bank is also in the process of transformation, building a lifestyle bank that not only takes care of your money, but also provides a plethora of services via its online app. In 2021 TCS revealed its 2023 strategy, with a focus on further customer growth cross-sell, and a deep dive into technology, targeting $1bn profit and 30% ROE by 2023, which was welcomed by both institutional and retail investors.

TCS is also targeting a strong trend of retail investors flocking to the equity market in Russia, and has most recently unveiled its sustainability agenda. Tinkoff Investment, its stocks app, is the market leader in Russia’s ongoing retail equity investment revolution.