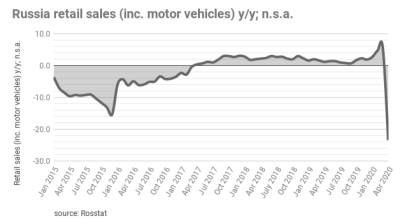 Russia's retail sales crashed by 23% in April, as unemployment almost doubles in just two weeks in May / bne IntelliNews
By bne IntelliNews May 27, 2020

Russia’s April lockdown hit the statistics this week, after Rosstat reported that retail sales were down a massive 23.4% year-on-year and unemployment has almost doubled in the month, the state statistics agency said on May 27.

The fall in retail was worse than the 17.7% consensus expectation by analysts. The drop comprised of a 9.3% y/y decline in food retail and a 36.7% y/y collapse in durable goods.

Russia was late to react to the spreading coronavirus (COVID-19) epidemic and initially in denial as Russian President Vladimir Putin was keen to go ahead with a referendum on the constitutional changes that could extend his rule by two more terms. However, Moscow mayor Sergey Sobyanin warned in a televised meeting with the president that the extent of infections was much wider than the official numbers suggested and took action.

Moscow was put on lock down on March 30 and an increasingly stringent stay-at-home regime was rapidly extended to everyone in the capital. Within days most of Russia’s regions followed suit.

With bars, cafes and all non-food related retail outlets even the rapid shift to shopping online was unable to make up for the damage done.

“Retail sales in Russia drop off the cliff under the lockdown. -23.4% y/y is a lot. Similar indicator was at -20.5% for China in February, at -9.2% for Eurozone in March, and at -21.6% for US in April,” said, Tatiana Evdokimova, Nordea Russia Chief Economist in a tweet.

Presidential Ombudsman for Business Boris Titov said during an online conference on May 6 he expects consumer demand in Russia to decline 10-15% in 2020 due to the coronavirus pandemic, TASS reported.

“We expect that countrywide real wages will fall. This applies primarily to the private sector, but also in the segment financed from the budget wages will be reduced. Therefore, [we will lose] 10-15% of demand at least this year,” he said. At the same time, Titov found it difficult to give a longer forecast.

The population is spending mostly on food and all big ticket or non-essential purchases have been put off during the uncertainty. Household spending on groceries reached 46% of total expenditures in March – a record high since this index was introduced -- according to Romir Scan Panel.

However, analysts at ING say that some of the fall was also due to households paying off debt and improving their personal financial position.

“The banking statistics suggest that the April drop in consumption was not a result of a deterioration in households' balance sheets. Around 80% of the reported y/y retail drop in April (RUB450bn out of RUB550bn) reflects deleveraging: last month the retail loan portfolio declined by RUB130bn month on month vs an increase by almost RUB320bn m/m in April 2019,” ING said in a note.

“As a result, it appears that the substantial drop in household consumption seen in April was mainly a result of deteriorating expectations, rather than an actual deterioration of households' financial position. Nevertheless, it in no way means that a recovery in consumer confidence will be an easy task,” ING said.

The news came as unemployment numbers also soared, up 23% y/y to 4.6mn people, leaping from 4.7% of the working population to 5.8% in just a month. Russian unemployment has been at post-Soviet lows for several years.

“The spike in unemployment from 4.7% to 5.8% in April (or by 0.8mn people) may seem modest compared to widely discussed US data, however, it should be noted that the Russian labour market favours adjustment through income, rather than employment, making the April result quite dramatic,” ING said.

With small and medium enterprises (the segment most hit by the quarantine measures) accounting for up to 25% of the officially employed, the scope for further increase in unemployment is not exhausted, according to ING.

Since March 1, 2020, 1,654mn Russian nationals applied to employment services either looking for a job or to receive a relevant allowance, according to the deputy prime minister, speaking in the middle of May.

Unemployment skyrocketed almost twofold in Russia to more than 1.4mn people by mid-May, Deputy Prime Minister Tatiana Golikova said on May 12, but has stepped up again in the last weeks of the month.

"The number of registered unemployed has increased as of the date we are speaking about — the date of transition to another stage — from 725,800 to 1,434mn people. That is, it has almost doubled or increased by 97.6%," Golikova said in the middle of the month.