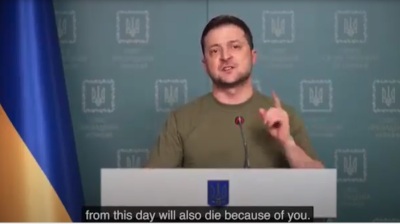 German Chancellor Olaf Scholz talked with Russian President Vladimir Putin on the phone on March 4 for an hour and called for an immediate end to all military actions. Scholz also called on Putin to allow access for humanitarian aid in areas where fighting was taking place.

The Russian president said a third round of Russia-Ukraine talks could happen over the weekend, but said his demands remained the same: Kyiv should recognise the Crimea is Russian territory; that Donetsk and Luhansk regions are now independent from Ukraine; and that Ukraine should declare neutrality.

The call was initiated by Berlin and Putin told Scholz that Russia was "open" to talks with Kyiv if all his demands were met. Russia is "open to dialogue with the Ukrainian side, as well as with all those who want peace in Ukraine. But on condition that all Russian demands are met," Putin said, reports Deutsche Welle, citing a German official involved in the talks.

However, Putin went on to say that either Kyiv must concede to Moscow's demands at the peace talks over the weekend or Moscow would simply impose the conditions on Ukraine “by military means,” Putin told Scholz.

During the second round of talks a day earlier the two sides agreed to set up humanitarian corridors to allow civilians from large cities to flee. However, the safe-passage corridor from the port city of Mariupol in the south of the country failed to be established as Russian forces did not cease their shelling, according to reports.

In a bizarre twist to the story, Ukrainian media reported that a member of the Ukrainian delegation at Gomel peace talks, Denys Kireyev, was killed by Ukrainian Security Service (SBU), as security agents tried to arrest him on suspicion of high treason. He is reportedly linked to elements in the ex-president Yanukovych’s government and had been leaking information to the Russian delegation during the negotiations. The SBU said it has overwhelming information that Kireyev had been acting as a Russian agent.

With a full-scale attack on Ukrainian cities looming and the strikes against residential cities increasing in both number and ferocity, Zelenskiy gave a video address where he lambasted Nato for not doing enough.

Zelenskiy made similar remarks in a televised press conference last week, but scaled up his criticism of Nato over the weekend as it becomes increasingly obvious that Ukraine will be left on its own to face the full weight of the Russian army. His remarks were provoked by a Nato members' meeting, where it was made clear the no-fly zone Kyiv has been demanding will not be forthcoming.

“Today the alliance’s leadership gave a green light to the further bombardment of Ukrainian towns and villages, refusing to establish a no-fly zone (over Ukraine),” Zelenskiy said during his latest address.

This weekend’s peace talks could prove to be a turning point in the conflict. So far Russia’s invasion force has remains concentrated in the regions just across the borders in the north, east and south of Ukraine, but have not made much progress into the country.

“We are the warriors of light,” Zelenskiy said of Ukrainians during the same address. He was scathing in his criticism of Nato countries, which, despite knowing Russia is only going to escalate in Ukraine, were refusing to do anything about it and close the sky over Ukraine.

Visibly angry with the material lack of western support in Ukraine’s time of need, Zelenskiy lambasted the West for its lack of determination and unity. He said the argument reflected the "self-hypnosis of those who are weak, under-confident inside" and that Western reservations indicated that "not everyone considers the struggle for freedom to be Europe's number one goal".

"All the people who will die starting from this day will also die because of you. Because of your weakness, because of your disunity," a furious Zelenskiy added, going on to say that the only thing that Nato has sent Ukraine is 50 tonnes of diesel fuel.

As bne IntelliNews opined in a comment on Russia’s “game of chicken”, Putin appears to be ratcheting up the tension incrementally but is pausing at each stage to hold talks in an effort to get Kyiv to concede to his demands. In the latest military round of the game Russia has dropped an estimated 500 rockets on Ukraine at the rate of two dozen a day, but has refrained from using its heavy armour and infantry. While the destruction of residential property has increased in the last days, the death toll amongst Ukrainian civilians remains a relatively modest circa 250 and Russia’s own losses are some 500 servicemen, according to official estimates.

However, that may change in the coming days. To the north of Kyiv a massive convoy stretching out over 64 km has remained stationary outside the capital for eight days. While there are reports that the convoy has run out of fuel and food, its presence threatens a full-scale attack on the city and a drastic scaling up of fighting that will result in massive destruction and death.

On March 5 Nato secretary-general Jens Stoltenberg warned that the introduction of a no-fly zone could lead to a "full-fledged war in Europe involving many more countries and causing much more human suffering".

“The only way to implement a no-fly zone is to send Nato planes, fighter planes into Ukrainian airspace, and then impose that no-fly zone by shooting down Russian planes. And our assessment is that we understand the desperation. But we also believe that if we did that, we'll end up with something that could end in a full-fledged war in Europe, involving many more countries, and causing much more human suffering. So that's the reason why we make this painful decision to impose heavy sanctions, provide significant support, stepping up support. But at the same time not involving Nato forces directly in the conflict in Ukraine, neither on the ground, or in their airspace,” Stoltenberg said at a press conference.

US Secretary of State Antony Blinken also ruled out the introduction of a no-fly zone, but told the BBC he was convinced Ukraine could win its war with Russia.

Separately Putin told a meeting of airline workers that any attempt by Nato or the international community to impose a no-fly zone over Ukraine would be regarded by Moscow “as participation in an armed conflict by that country", implying Russia would see a no-fly zone as an act of war against it by the West.

In the south-eastern port city of Mariupol, the city's mayor said that residents are under a "blockade" after days of "ruthless" attacks from Russian forces which have seen power and water shut off to the city's 450,000 strong population.

Mariupol’s Mayor Vadym Boychenko pleaded for help and asked for the humanitarian corridor out of the city to be opened. He said the city is cut off from heating, water and electricity, while people are running out of food and medicine. “We are being destroyed here,” he said.

A humanitarian corridor agreed with Russia at the peace talks on March 5 was not implemented, as the Russian military did not cease their shelling of the outskirts of the city.

The exodus of the besieged Ukrainians continued and gathered momentum over the weekend. As of March 3, more than 1.2mn refugees have left Ukraine since Russia's full-scale invasion began on February 24, the United Nations High Commissioner for Refugees reports, as cited by the Kyiv Independent.

Another Russian strategic goal was achieved after the North Crimean Canal was unblocked by the advancing troops and began to fill with water. The peninsula lacks its own fresh water supplies and relies on the canal for drinking water and to irrigate is extensive agricultural production. However, after Russia annexed the peninsula in 2014 Kyiv blocked the canal, cutting off its main water supply. Moscow has struggled to supply the Crimea with enough water and has talked of building extremely expensive desalination plants, but unblocking the canal has brought some immediate relief to the parched peninsula.