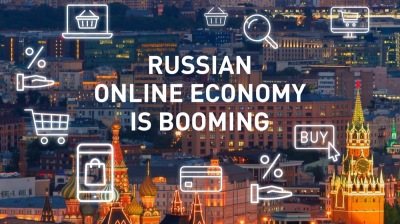 E-commerce is booming and dominated by the top ten players, but the sector is already starting to consolidate. / wiki
By Cameron Jones in London August 12, 2021

Russian e-commerce is booming and grocery delivery is becoming a key growth driver for the sector. By 2024 the turnover of this business may exceed RUB1 trillion, according to Infoline. At the same time, the ten largest players will provide almost 90% of sales. The e-commerce market is currently very competitive, but it is expected to rapidly consolidate in the coming years.

Between January and June this year, online product sales exceeded RUB50bn ($670mn), which is 2.5 times higher than the same indicator for the previous year. It is expected that by the end of the year the market turnover will reach RUB400bn, and by 2024 - RUB1.1 trillion. The share of grocery businesses in the e-commerce market as a whole will increase from 5.3% to 18.8%, The Bell reports.

The coronavirus pandemic has obviously become the catalyst for the development of online grocery trading in 2020, and one of the key results has been an increase in consumer confidence, Infoline said. Over the past year, the audience of active clients has grown by more than 40%, up to 60mn people, analysts calculated. According to the agency's general director Ivan Fedyakov, companies continue to actively invest in expansion into regions, some of which show results comparable to Moscow.

About 87% of all orders today fall on the ten largest players (a year earlier it was 80%). According to the results of the first half of the year, X5 Group (Perekrestok.Vprok and express delivery services) remained the market leader, Sbermarket took the second place, and VkusVill took the third place. Y/y online turnover of companies grew by 64.4%, 233% and 437%, respectively. Among all these companies, VkusVill showed the highest growth - 437% y/y and stormed straight into third place, only behind giants X5 and Sber respectively. These results are even more impressive when consider that VkusVill had close to zero e-commerce presence last year. The top five also included Samokat, its sales increased by 419%, and Yandex.Lavka - by 244%.

Yandex agreed that over the past year, fast moving consumer good (FMCG) have been the engines of e-commerce growth. In the second quarter of 2021, FMCG took the largest share of 39% in the e-commerce company, overtaking even electronics (33%).

The top ten grocery operators, according to Infoline, also included Ozon (98% y/y growth), Wildberries (+ 147%), Utkonos (17%), Lenta and iGoods (a 25% drop in turnover). The appearance of new major players should not be expected, says the CEO of Infoline: the level of market consolidation may already be extreme.

Nielsen warns that as in the experience of other countries, online retailers in Russia will have a very difficult time reaching double-digit market share in the next two years. Despite the impressive results of last year in the UK, the FMGG online market share was fixed at 12%, in France - 10%, in Spain - 3%, Alexander Shurkaev, head of online trading at NielsenIQ Russia, told Kommersant, as cited by The Bell. Regional expansion of services, development of assortment, including the fresh category, and the launch of alcohol delivery can push the further development of this area, he said.