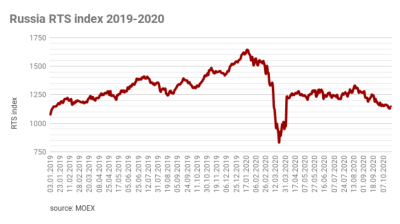 Russian stocks are flat and starting to drift down thanks to problems with the oil and gas sector as investors sit on their hands until the US presidential elections pass
By Ben Aris in Berlin October 23, 2020

Russian dedicated equity funds saw $30mn of outflows as of October 22 and combined funds an outflow of $40mn, according to EPFR Global, as cited by BCS Global Markets.

The outflows follow $20mn of inflows and $10mn of outflows the previous week respectively, says EPFR.

The dollar-denominated Russia Trading System (RTS) is basically flat and stuck at about 1,150, where it has been after recovering from the crash in March when the double whammy of an oil price collapse and when the coronavirus (COVID-19) pandemic began. The RTS index remains down by 25% this year as of October 22.

The story with the ruble-denominated MOEX Russia Index is similar, but includes an FX element, where the exchange rates have been volatile this year. The MOEX index is down by 8% as of October 22.

However, digging into the details and the sectors are putting in different performances and a few individual names have managed to shrug off the crisis and actually produce healthy returns to investors.

The RTS was flat at about 1,200 for most of the summer but has started to drift down in recent weeks. However, within the index consumer stocks and metals & mining have actually clawed back all their losses and are returning a positive, albeit modest, 6% and 5% respectively, after falling deeply into the red earlier this year. The other sectors are all stuck at about 15%-18% down YTD, but the oil & gas sector is the real problem, with those stocks being heavily punished.

Oil & gas stocks were trading about 30% down YTD for most of the summer, but in the last weeks they have fallen even further and the sector is currently returning a loss of 42% since the start of the year. Given the size of the listed oil & gas companies the effect has been to drag the overall RTS index down, but that drop is almost entirely due to the fall in the oil & gas sector.

Investors are largely remaining on the sidelines until the US presidential elections slated for November are over. A victor by Joe Biden looks increasingly likely and analysts are mixed on what that will mean for Russia. Biden is seen as something of a Russia hawk, but on the other hand at least he is sane, which will return some sort of predictability to forecasting. As both stocks and the ruble are very depressed due to sentiment at the moment, analysts are speculating that once the US elections are over there could be a mini-re-rating of the market as stocks and bond prices take account of the end of the unpredictability that has come with the Trump administration.

“If the second wave of the COVID-19 pandemic finds its trough and the US elections go smoothly in the coming weeks, we see a good chance for the Russian market to finish the year on a strong note – flow momentum is still neutral to negative,” Smolyaninov added.

There are early signs that some investors are already positioning themselves for the re-adjustment rally. As bne IntelliNews reported, Russian residential real estate developer Samolet has just priced its IPO on MOEX that starts trading next week and is expected to be a success. As bne IntelliNews also reported, the residential real estate sector has been booming on the back of a highly successful government mortgage subsidy that keeps effective interest rates for would-be homeowners at 6.5%.

Residential real estate stocks have been a popular investment pre-crisis but the lion’s share of investment went into market leader PIK, which became something of a “tourist stock” – investors that wanted exposure to Russian consumers and real estate buy this name, but ignore the others. While the stocks of the three big listed real estate companies – including LSR Group (LSR) and Etalon – have recovered much of the lost ground, those of PIK have done much better and the company is now returning 20% YTD, whereas the other two remain underwater compared to their January 1 prices. 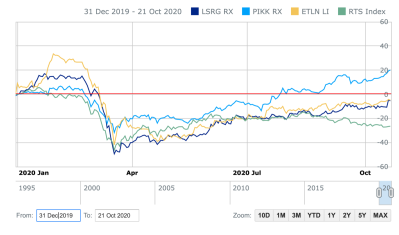 There are other examples of investors quietly buying back into the previous market darlings in anticipation of a Biden victor and a return to business as usual, even if US foreign policy becomes tougher on Russia.

Bonds continue to pull in investors

The interest in Russian bonds remains strong and they are considered one of the most popular fixed income instruments globally thanks to Russia’s rock solid fundamentals and the relatively high coupon rates the bonds pay. Russian bonds have seen 21 consecutive weeks of inflows and while the share of non-residents in the flagship Russian Ministry of Finance ruble-denominated OFZ treasury bills has slipped slightly, the amount on foreign investment into the notes remains well ahead of that at the start of the year.

“Another solid week for EM bond funds. GEM bond funds reported the third consecutive week of solid inflows with another $1bn into the asset class this time. This positive dynamic is already being reflected in better FX standing of EM currencies,” Smolyaninov said. “Russia bond funds also informed of the 21st week of inflows in a row. We read the data as positive for bonds in the short term.”

Russian dedicated bond funds saw $10mn of inflows in the seven days ending on October 22, the 21st straight week of inflows, and combined funds took in $60mn, 14 out of 15 weeks of inflows.

Russia’s Ministry of Finance is intending to double borrowing on the domestic market this and issue over RUB4 trillion ($52.4bn) of OFZ this year to fund the extra spending earmarked for coping with the coronacrisis, before returning to the circa RUB2 trillion it usually issues each year.

After a turbulent four years, Romania’s December 6 general election looks set to install a government led by the centre-right PNL and backed by a stable majority in parliament.