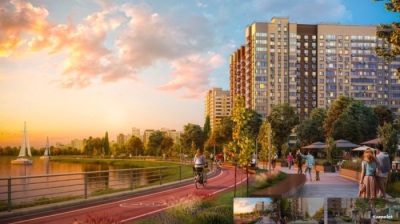 Russia's residential real estate developer Samolet has priced its shares ahead of its IPO that value the company at c$750mn. Trading begins on October 29
By Ben Aris in Berlin October 22, 2020

The new kid on the Russian listed residential real estate developer’s block, Samolet Group, has announced the price range for its impending IPO on Moscow Exchange (MOEX) on October 22. The shares have already been placed on the exchange and trading is expected to start on October 29.

“The company’s intention to float on Moscow Exchange has received a strong response from the investment community. Investors have a good understanding of both Samolet Group’s fundamental competitive advantages in the sector and the long-term growth potential of the Russian real estate market,” Anton Elistratov, CEO of Samolet Group, said. “Today we are pleased to announce the price range as the next step of the offering process.”

As bne IntelliNews  reported in an interview with the chairman of Samolet, Stanislav Shekshnya, last year, the residential real estate market has flown in the last few years, and it is still flying this year despite the coronacrisis thanks to the government’s generous mortgage subsidies programme.

In an effort to give the construction sector a boost the government has been subsidising mortgages to keep the effective rate for would-be homeowners at 6.5%, versus the Central Bank of Russia (CBR) prime rate of 4.5%, and has just decided to extend and more than double the amount given to the programme, which will be continued into 2021. The lower rates means that mortgages have now become affordable for additional millions of Russians and up to two thirds of sales of newly built apartments are now financed by mortgage payments.

Samolet has been one of the big winners and intends to join the other heavyweight developers PIK, LSR Group (LSR) and Etalon on the public exchanges, the company said in the middle of October.

The existing shareholders will offer circa 5.1% of the company shares to investors. The offer is being led by Samolet’s principal shareholder Pavel Golubkov and he will offer, together with his fellow shareholders, stakes of 1%, 0.5% and 3.6% from their respective holdings.

If the IPO is successful the valuation would make Samolet the third most valuable real estate company in Russia, although it would remain far behind market leader PIK. For comparison the market capitalisations of the other majors currently are: PIK ($5.1bn), LSR ($1.2bn) and Etalon ($487mn).

As previously announced, the company will offer just under 5.1% of the company’s stock to investors.

“As part of the offering, up to 3,078,968 ordinary shares of the company will be offered by Legal Agency Moscovia, Ltd, which is controlled by Golubkov. Based on the price range, the offering size corresponds to RUB2.9bn to RUB3.4bn assuming all shares in the offering are placed,” Samolet said in a statement.

The shares have been admitted to trading on the Moscow Exchange and dealings in the shares are expected to commence on October 29 under the ticker “SMLT” and ISIN RU000A0ZZG02.

Two market-makers are expected to be appointed by the company to provide market-making services in the shares starting from the first day of trading in accordance with the policies of the Moscow Exchange.

In addition, the company has applied to the Central Bank of Russia (CBR) to issue 2.5% of new shares that are going to be placed in an open subscription, the proceeds of which will invested into the company’s business to buy new land plots and finance the construction of ongoing projects.

The full details of the planned IPO will be included in the offering memorandum, which is supposed to be published by Samolet on its corporate website later today.

Once trading has started there will be a lock-up period of 90 days where the existing shareholders are not allowed to sell more of their stakes.

The company’s long-term goals are the transformation of the group into a high-tech real-estate developer, and to strengthen its position at the national level, the company said.

“Over the past year and a half, the company has made a quantum leap towards attaining these goals: Samolet Group has successfully switched its financial and operational activity into project finance mode, and grown the company’s land bank and project portfolio to a level that is unequalled in the Russian market. The group has created a reserve for growth in our key market – the Moscow region – and thanks to asset-light business model is able to move fast to seize new opportunities in other Russian regions,” Samolet said in a statement.

Like many leading Russian companies the management has placed a premium on good corporate governance as a way of enticing investors to invest in its stock and recently announced its dividend policy along with its declaration of its plans to float.

The company is offering a minimum guaranteed dividend payout of RUB5bn ($65mn) a year irrespective of its financial performance and larger payments depending on the earnings and debt position of the company. If the net debt/adjusted EBITDA ratio is below one then it will  pay out 50% of profits as dividends and if the ratio is between one and two then 33%. If the ratio is over two then the company may not pay any dividends other than the guaranteed RUB5bn.

Founded in 2012, Samolet Group is one of the largest developers in the Moscow region and ranks among the top 10 developers in Russia in terms of volume of ongoing construction. As of the end of 2019, the company ranked fifth in Russia by volume of new housing delivered. The group is included in the Russian government’s list of strategically important companies, the company said in its statement.

Samolet Group specialises in large-scale, full-cycle development projects, while ensuring the construction of social infrastructure facilities during the first phases of its projects. The company has an ACRA rating of BBB+ (positive outlook), an NCR rating of A-.ru (stable outlook) and an Expert RA rating of ruA- (stable outlook).

Since its foundation, the company has delivered more than 2mn square metres of real estate. The company’s project portfolio exceeds 15mn sqm and continues to grow.