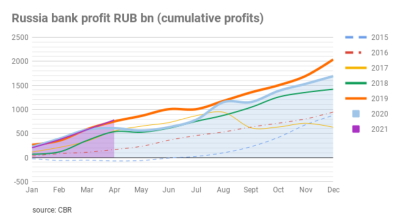 On a cumulative basis this year’s profits in April were slightly ahead of those in 2020, with banks earning RUB779bn ($10.6bn) over the first four months of the year.
By bne IntelliNews May 30, 2021

The Russian banking sector profitability continued to follow the course of 2019, the first year of strong growth since the 2014 oil price shock that plunged the country’s economy into stagnation.

April was also the month where the pandemic shock kicked in and as the chart shows, banking sector profits in that month fell below the profits of 2017 and 2018. Having said that, in 2020 banking sector profitability held up surprisingly well, and in August almost regained the 2019 levels as the lockdown was removed.

On a month-on-month basis banks also outperformed in March, earning RUB201bn ($2.75bn) which is six times more than they earned in March 2020 and comfortably ahead of every year for the last five years.

With a year of strongish economic growth ahead and a flourishing corporate sector, where Russia’s corporates are currently earning their strongest profits in five years, the outlook for the banking sector is good for 2021.

In April, the retail lending acceleration continued, led by mortgages on the back of the state sponsored mortgage subsidy programme and growing unsecured loans. Corporate lending growth also accelerated.

Banks continued to ramp up investments in OFZ to support the MinFin due to volatility on the market caused by the threat of new harsh US sanctions. However, after largely symbolic sanctions were imposed on April 15, international investors are now returning to the OFZ market and taking up some of the slack.

On the funding side, there was a significant rise in the population's funds, mainly associated with advance social payments due to the announced non-working days between the May holidays, and also increased placement of public funds, mainly due to tax revenues and from the placement of OFZ.

In April, there was a decrease in overdue debts of borrowers, both corporate (-RUB5bn, or 0.2%) due to rescheduling of claims on problem loans to large banks, and retail (-RUB2bn, or 0.3%).

Banks have continued to increase their investments in debt securities (RUB277bn, or 1.7%), mainly OFZs. In April 2021, the Ministry of Finance of Russia, within the framework of auctions for the placement of OFZ, attracted funds amounting to about RUB490bn and Russian banks bought more than 85% of these.

Funds of legal entities practically did not change in April (-RUB21bn, or 0.1%), but at the same time their currency structure slightly changed due to the outflow of funds (-RUB238bn) and the corresponding increase in foreign exchange ($2.9bn, or RUB217bn equivalent).

Household funds grew by a significant RUB942bn. (+ 2.9%) entirely at the expense of current accounts (+RUB1,024bn, or 8.9%). The growth was due to the declared non-working days between May holidays, due to which part of social benefits (including pensions) and salaries for May were paid in advance in April. Thus, given seasonal growth in consumer spending in May, a moderate outflow of deposits can be expected.

The inflow of funds from the population in escrow accounts, supported by the growth of mortgages, continued to rise (RUB208bn, or 13.2%).

A significant increase in public funds (RUB0.9 trillion, or 12.9%) is associated with large tax revenues to the budget (in April VAT was paid for the first quarter of 2021, and some companies paid their annual income tax for 2020) against the backdrop of moderate government spending, as well as funds received from the placement of OFZs.