Russia’s stock market puts in its best performance in a decade, gains 26% YTD 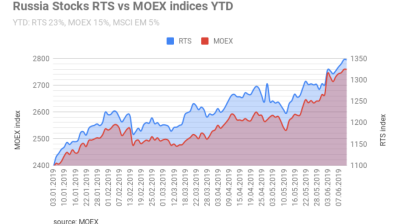 Russia’s leading dollar denominated Russia Trading System (RTS) has surged by just over a quarter (26%) YTD as of June 14. Stocks are now trading at a levels above where they were when sanctions were imposed following the annexation of Crimea in 2014.

The rise in share prices were led by the utilities sector, which is up 31% YTD on the back of an increasingly popular reform programme recently launched by the government. Russia’s market is now the second best performing in the world after Greece.

The financial sector has been leading the way for most of the year, overtaking last year’s star performer, the oil and gas sector, to become the most attractive sector for most of the first quarter. The metals and mining sector, which did well following the devaluation of 2015 as profits were boosted by falling ruble-costs, and the long standing investors favourite, the consumer sector, both seemed to have run their course.

However, even the less well performing sectors have all done very well this year with financials up 25% and oil and gas up 21% respectively, as the growth in share prices seems to be turning into a broader based rally.

Counter intuitively, the rally comes against the backdrop of soggy economic growth. The Russian economy stagnated in the first quarter of this year, growing only 0.8% in the first three months, well below even the most pessimistic forecasts.

However, the stagnation is ironically driving the growth of corporate profits amongst the leading companies. For most of the 90s and noughties the game was grow revenue as fast as possible and capture as much market share as possible as companies filled out the corners of the market.

That process has come to an end. In the retail sector, in particular, the leading companies have stopped opening new stores and have even begun to close some of the less profitable ones. Real income growth has been stagnant for five years, forcing companies to turn inwards and reform their efficiency and productivity as a source of profit growth, rather than simply selling more widgets at higher prices. At the same time as the capex falls after the expansion drive ends companies have more cash. With nothing to invest into they are choosing to share these profits with investors as dividends and Russian companies are now paying the highest dividends amongst all the emerging markets; Russia’s dividend yields are twice those of the benchmark MSCI EM average.

Finally, the austere economic environment means that the smaller companies are merging, folding or being acquired by their larger rivals. There has been a string of mega-mergers in the retail sector over the last year starting with the tie up between white goods retailer M-Video and Eldorado that also bought German rival Media Markt, and ending most recently with the takeover of Lenta by metals tycoon Alexey Mordashov. Companies have continued to grow their revenues, but through acquisition rather than via store openings.

The story is the same in several other sectors as the austerity is driving a broad-based consolidation amongst companies, albeit that the different sectors are at different stages in the process.

But all in all, Russian aggregate corporate profits rose to RUB2,472bn ($38bn) in February, adding RUB1,208bn to the profits made in January – the best result in at least three years. That brings the cumulative profits Russian companies earned in February well ahead of the RUB1,740bn they earned in the same period of 2018, which was already a strong year compared to 2017 and 2016.

The situation in utilities is a little different as share price rises are being driven by the government decision to restart its reform programme for the sector.

A previous reform was launched in the mid noughties that drove share prices to rise at the time until the 2008 crisis struck and put the programme on hold. Now the Kremlin is having another go.

The Russian energy ministry released a revised plan to modernise the utilities sector last August. Utilities were a key focus before the crash as the government attempted to change the regulations to encourage investment into new generation facilities and several market-orientated reforms have already been put in place to create a market for power that attracted massive investment during the privatisation phase overseen by Anatoly Chubais.

At the same time the investment phase prompted by the previous reforms is coming to an end, which means power companies, like retail companies, are throwing off more cash. Clearly portfolio investors like what they see. While the whole market has been doing surprisingly well this year, the utilities sector was a laggard with weekly gains of 12%-14% in February, but those have picked up rapidly in the last month.

Amongst the other sectors, banks have been a steady outperformer as the sector recovers from the “silent crisis” of the last few years. As bne IntelliNews has already reported, the banking sector’s cumulative profits in the first quarter were better than at any time in the last five years and will continue to grow this year. The combined net profit of Russian banks soared to RUB587bn in January-March from RUB353bn in the same period of 2018, the central bank said in a report on April 16.

Despite the stock market rally, Russia’s equity market remains extremely undervalued, as bne IntelliNews recently discussed in a feature “Why are Russian stocks so cheap?”

Individual stocks have performed very well and several notable bluechips have seen their market capitalisation double in recent years on the back of growing revenues and increasing profitability: supermarket chain X5 group and privately owned LNG producer Novatek are prime examples. However, one of the main factors that has been holding back the index growth – which has been range bound between 900 and 1300 for most of the last five years – has been the underperformance of the state-owned enterprises (SOEs), which have been reluctant to share their billions of dollars of income with shareholders.

But even that has started to change. The state-owned gas behemoth Gazprom surprised the market in May by hiking dividends twice in a week and doubling the amount it pays out, resulting in its stock price leaping by 30% in a matter of days. The Ministry of Finance has been campaigning to force all the SOEs to increase their dividend payouts to 50% of profits and it seems that it is succeeding in enforcing its previously widely-ignored order. Most of the state’s companies are now either already paying 50% or have definite plans to increase dividend payouts to 50% by next year.