Russia’s manufacturing PMI runs out of steam in October 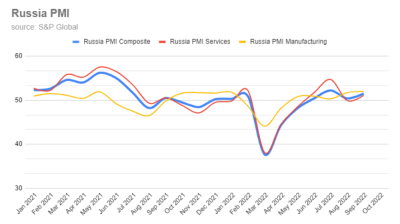 The seasonally adjusted S&P Russia Manufacturing Purchasing Managers’ Index (PMI) posted 50.7 in October, remaining above the no-change mark of 50.0 indicating expansion, but slowing down from 52.0 seen in September.

As covered by bne IntelliNews, previously the industrial output and PMI numbers supported the sentiment that the Russian economy was doing much better than expected under sanctions for the military invasion of Ukraine.

But September industrial output figures posted a larger-than-expected contraction, suggesting that industrial resistance to the fallout of the military invasion of Ukraine is running out of steam, if not yet stymied by the most recent escalation of the war.

The PMI in October too “signalled only a marginal improvement in the health of the Russian manufacturing sector and one that was the slowest since July,” according to S&P report. While the sanction-driven slashes in external demand persist, the domestic demand’s ability to support the industry is fading.

“Although firms noted that import substitution efforts boosted demand, the rate of expansion was the slowest for four months,” the report noted, while adding that foreign client demand declined sharply. Anecdotal evidence often mentioned that the drop was due to limitations on international trading partners following sanctions, according to S&P.

As a result, the manufacturing sector in the reporting month saw a weaker improvement in operating conditions as demand growth moderated, amid softer increases in output and new orders. Although new sales continued to rise, companies recorded another reduction in backlogs of work.

The manufacturers faced higher input inflation, and “in line with reports of higher cost burdens due to [sanction] logistics challenges, vendor performance deteriorated sharply. Lead times lengthened to the greatest extent since July, but firms stepped up their input buying during October”.

Still, Russian manufacturers remained upbeat regarding the outlook for output over the next year, with the degree of confidence the second-highest since April 2019. “Although lower than September, the degree of confidence in the year-ahead outlook was the second-highest since April 2019 amid hopes of greater client demand and investment in product development,” S&P said.