Russia’s industrial production contracts in June, but by less than expected 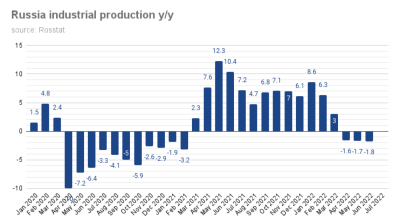 Russia's industrial production fell by 1.8% in June y/y, but that is much less than the 5.3% contraction economists were expecting. / wiki
By bne IntelliNews July 28, 2022

Russia’s industrial output fell 1.8% in June year on year, following a 1.7% decline in the previous month but less than market forecasts of a 5.3% contraction, RosStat reported on July 27.

It was the second and steepest fall in industrial activity since February last year (chart), and several sectors that are the most exposed to sanctions were particularly hard hit. However, the overall level of production has been held up by the high commodity prices but volumes of things like gas production were down due to sanctions.

“The Russian industrial production figures for June were surprisingly strong, which likely reflects a pick-up in oil production. But retail sales remain depressed and show no sign of a turnaround. Our provisional assessment is that Russian GDP contracted by 9% quarter on quarter in Q2 and we think the economy will experience another, albeit smaller, decline in Q3,” Capital Economics said in a note.

Russia’s GDP contracted 4.9% y/y in June, indicating some moderation in economic contraction. The main support came from a 2.3% growth in mining sector, the Economics Ministry announced on July 28.

“RosStat data suggests that some moderation in economic contraction was driven by a 2.3% y/y growth in mining sector, following a c1% decline in May; and still sustainable 2.1% y/y growth in agriculture. At the same time, the contraction in manufacturing accelerated in June to 4.5% y/y vs 3.2% y/y in May. Construction, which was one the key drivers of Russian economic activity in April-May, showed [a] sideways trend in June, with only 0.1% y/y growth,” said Natalia Lavrova, an economist with BCS GM.

Despite the headline fall in industrial production, RosStat’s seasonal adjustment showed that output was flat month on month. The slump in manufacturing deepened to 4.5% y/y, while there was a surprising pick-up in mining output from -0.8% y/y in May to 2.3% y/y in June, Capital Economics reports.

Drilling into the details, gas production fell significantly to 39.3bn cubic metres in June from 49 bcm in May, which was the month when Gazprom reduced flows of gas to Europe by 60% as part of the ongoing gas war with Europe. That number will decrease again when the data is updated for July, as Gazprom has reduced gas flows further to 20% of capacity in the Nord Stream 1 pipeline in the last week of July. Russian gas output is now 23.3% lower than in June 2021, reflecting the gas cut-off of the EU.

The lower gas production was also reflected in the earnings from gas, which tumbled 40% month on month in June due to Gazprom’s self-inflicted gas war damage. In volume terms, Russia exported 10.9 bcm in June, down from 12 bcm in the previous month. In contrast, it shipped 15.7 bcm in May and in June in 2021.

Oil production, on the other hand, has begun to recover as countries like India and China step into the beach left by traders that self-sanctioned and stopped buying Russian oil after the war in Ukraine started in February. However, export volumes are still down, although export earnings from oil are up: oil exports sank by 13% from May to June, from 18.9mn tonnes to 16.5mn tonnes, but revenues grew from €10.2bn to €10.5bn and are higher than for the same period in 2021.

“From the partial breakdown we estimate that oil and gas production rose by 3.5% in seasonal adjusted m/m terms. There is no granular split but this seems to reflect higher oil production as RosStat reported that production of combustible natural gas was down 23% y/y in bcm terms in June.”

The slowdown also hit the related chemical and petrochemical sectors, where ammonia production tumbled 21% and potash was down 32.1%.

The sectors that performed worst are those directly affected by sanctions and no sector is more exposed than the automotive sector, where some 60% of the parts are imported, as a basic part of the foreign manufacturer’s business model, as bne IntelliNews reports in a feature on the collapse of AvtoVaz’s production.

Car production in June was down 89% in June y/y, although there was a tiny rebound over the previous month as carmakers started to find alternative sources for some of the missing imported parts. However, cars are now being manufactured without things like GPS or airbags, which were all imported and now unavailable. A total 13,400 cars were produced in June, against the mere 3,700 that were assembled in May. The sales of cars in May however, were better: 24,268 cars were sold, but that is down from the 100,000-150,000 that were typically sold each month before the war. (chart) Likewise, truck production was down by 40% y/y in June.

Other sectors exposed to sanctions did equally badly. Computers and semiconductors did particularly badly as inventories became exhausted, and it is impossible to import replacements. Production halved m/m from 5.3mn pieces produced in May to 2.5mn pieces in June and was down 39.6% y/y.

And general manufacturing was down, as much driven by the fall in demand as the lack of inputs. Production of washing machines was down 58.4% y/y in June, fridge-freezers down 52.3% and cigarettes down 32.4%.

“As for manufacturing, it was another mixed performance under the surface. Production of machinery and electrical equipment picked up, but output of computers declined, and motor vehicle production was down by around 63% y/y,” Capital Economics reports.

Life in Russia goes on largely as normal, as apart from the disappearance of leading international retail brands such as McDonalds, IKEA and the clothing and apparel vendors, the shops remain full and the bulk of Russian’s shopping basket is made up of domestically produced goods. Many of the more expensive items in the basket that were imported, like soaps, creams or high-quality processed foods, have already been replaced by domestic goods or imports from the likes of Turkey and China.

Uncertainties due to the war have also depressed demand as shoppers hold off on big ticket purchases until there is more clarity on where the war is going. Inflation has started to fall from its peak of 17.8% in April to 15.9% in June, but high prices are also depressing demand. (chart)

“Retail sales remained depressed in June. The contraction in sales eased a touch from 10.1% y/y in May to 9.6% y/y in June. In seasonally adjusted m/m terms we estimate that retail sales have stagnated over the past two months and remain 10% below their level in February. Consumers are clearly feeling the pinch from high prices – although inflation has eased since April, goods prices are 10% higher than they were in February and prices of electrical appliances are still 25% higher,” Capital Economics said.

“Overall, the latest data provide a clearer assessment of the hit to Russia’s economy in Q2. Industrial production declined by 2.8% q/q, with mining output falling almost 6% q/q. Retail sales plunged nearly 11% q/q. Our provisional assessment is that GDP contracted by 9% q/q last quarter. Activity is likely to remain weak in the second half of this year and we have pencilled in another fall in GDP in Q3 as sanctions continue to take their toll across the economy. Our forecast is for a 7% contraction in GDP this year,” Capital Economics concluded.