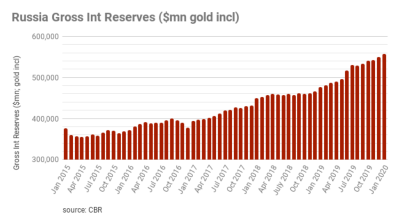 Russia's international reserves have reached an all time high of $557.5bn
By bne IntelliNews January 22, 2020

Russia’s reserves have been rising steadily since the crisis of 2014 began with the collapse of oil prices and a subsequent deep devaluation of the ruble.

The CBR had been following an informal policy to build up reserves to its “comfort level” of $500bn and passed that milestone for the first time in five years in June.

At the same time the CBR has slowed the pace of its accumulation of gold. The central bank has run a policy of building up gold as a share of its reserves since 2007, but it clearly has reached a point where this comfort level has also been reached.

After spending an estimated $40bn on the precious metal in the past five years, the central bank is starting to rein in spending – it bought 149 tonnes of gold in the first 11 months of 2019, 44% less than the year before. Annual purchases are expected to be the lowest in six years.

And finally the CBR has returned to the US debt market after selling off much of its holding in US treasury bills last spring. With excess reserves the CBR has been looking for investments.

Russian holdings of US debt increased by $794mn in November 2019 to $11.491bn, including $8.512bn worth of short-term securities and $2.979bn worth of long-term securities, according to the data provided by the US Department of the Treasury as cited by Tass.

“Russia’s international reserves-to-total external debt ratio rises to 115% by end 2019 and is expected to grow further on continued FX buying under fiscal rule,” tweeted Ivan Tkachev, the economics editor at RBC. “Among major emerging economies Russia is second only to China under this metric.”

Russian inflation peaks in February at 5.7% y/y
Germany calls for greater co-operation with Russia in a controversial paper ahead of EU ministers' meeting
COMMENT: OPEC+ puts off production cut decision for a month

CPI rate reached 5.7% y/y in February, the Central Bank of Russia (CBR) reported on March 5. This marks the highest level since November 2016.

BVB officials expect 20 more bond and share issues this year after a surge in interest in the alternative AeRO market.

Ukraine’s gross international reserves (GIR) fell by 1% to $28.5bn due to redemption of debt obligations, the National Bank of Ukraine (NBU) reported on March 5 as cited by Unian.