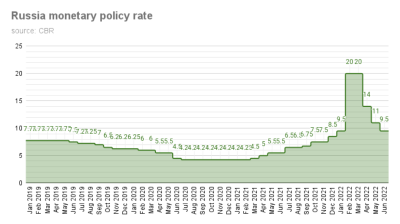 Russia's central bank imposed an emergency rate hike from 9.5% to 20% days after the war started, but it has cut rates four times since, returning them to 9.5%. / bne IntelliNews
By bne IntelliNews June 10, 2022

The board of the Central Bank of Russia (CBR) cut the key interest rate by 150 basis points from 11% to a single-digit 9.5%, projecting confidence in managing the sanctioned and isolated Russian economy as it brings the interest rate to where it was prior to the military invasion of Ukraine.

As followed by bne IntelliNews, the CBR held an unplanned ahead-of-schedule policy meeting on May 26, at which the board of the regulator slashed the key interest rate by 300 basis points (bp) from 14% to 11%. This was an aggressive cut, exceeding the expectations of a 200bp key rate reduction and the third cut in two months.

Now the CBR has brought the total cuts to 10.5 percentage points since it jacked up the key interest rate to 20% in emergency mode following Russia’s military invasion of Ukraine.

This time too, the CBR cut the rate by 50bp more than anticipated by the market, as the consensus expectations were for a 10% interest rate. The CBR projects confidence that inflation and the ruble rate are where it wants them to be, while being more concerned with reviving economic growth.

The CBR has revised its inflation forecast for 2022 downwards from 18%-23% previously to 14%-17%, while commenting that "important factors for further inflation dynamics will be the efficiency of import substitution processes, as well as the scale and speed of recovery of imports of finished goods, raw materials and components”.

The CBR still expects annual inflation to diminish to 5%-7% in 2023 and return to the target 4% in 2024. At the same time, some analysts warned that the inflationary situation could worsen in the second half of the year and the worst of it could yet arise from the sanctions.

As bne IntelliNews reported, the whole world is facing the danger of stagflation as inflation rises everywhere, driven up by food prices due to a global food crisis caused in part by Russia’s war on Ukraine. At the press conference following the key rate decision, the head of the CBR Elvira Nabiullina said that the CBR is considering stagflation risks, but not in a base-case scenario.

“We need to design the following policies: on one hand, not hampering the structural reshaping of the economy [amid sanctions]; on the other, avoid stagflation risks. In the former case high [key interest rate] or demand contraction, outpacing the supply decline could create problems. In the latter, a [key interest rate] too low will create problems if the companies have no objective means of increasing supply,” Nabiullina said, outlining the CBR’s current dilemma.

So far, the CBR seems to be confident in Russia's economic performance, as it noted that “the slowdown in business activity, after a sharp fall in April, came to a halt in May”. The regulator also appeared to warn the government and Kremlin against further attempts to ramp up social spending, writing that “tighter monetary policy may be required in case of an additional widening of the fiscal deficit”.

The government just announced a boost to pensions as part of a RUB1.6 trillion social spending package to counter the effects of the sanctions and to compensate for the rising prices. In all, the Ministry of Finance says it may spend as much as RUB4 trillion on social support this year.

The analysts surveyed by RBC business daily also note that the CBR cut the rate faster than expected, but reminded that the CBR guided for a slower cut in rates once it comes to single-digit territory. CBR Governor Nabiullina previously said that the regulator could return to its “standard” steps (of 25 basis points rate cuts), once the key interest rate goes below 10%.

Renaissance Capital on June 10 noted that the CBR chose one of the most dovish wordings when guiding for future rate decisions: "the Central Bank of Russia will assess the appropriateness of a key rate cut at the next meetings”.

“This prepares us for further rate cuts to be smoother and more cautious. In July we could see another 50bp cut to 9%. We maintain our key rate forecast at 8.0% at the end of 2022,” RenCap analysts believe.

“The regulator’s decision was primarily driven by growing uncertainty and weak economic prospects. Recent PMI data indicated a further decline in Russian economic activity. As such, the Composite PMI in May remained below the 50-point threshold: while the manufacturing PMI showed some signs of improvement, posting 50.8 vs 48.2 in April, the service side remained in the contraction territory. The regulator flagged some moderation in economic contraction in May, but sanction pressure continues to grow, hence uncertainty is still high,” BCG Global Markets commented.

However, BCS GM analysts argue that weak consumption will persist and will continue to curb inflation.

BCS GM argues that the financial sector has fully stabilised, with a liquidity surplus of above RUB2 trillion and strong inflows of short-term retail deposits. Still, the retail loan portfolio and issuance remain weak, with the current rate cut being a necessary step for lending and economic activity revival.

BCS GM believes that the CBR will proceed with its rate cut cycle as economic prospects are still challenging, cutting the key rate to 7.5%-8% by 2022, albeit with slower rate cuts amid a number of short-term inflationary risks, such as ruble depreciation and the end of seasonal food deflation in 2H22.

Otkritie Research argues that recent relaxing of currency controls and lifting mandatory currency sales for exporters will not be enough amid high interest rates and expectations of a strong ruble. The analysts argue that the CBR will have to do more to stimulate demand for foreign currency and will still have to cut the rate substantially to at least 7%.

However, Otkritie admits that since free floating the ruble the CBR has repeatedly stated that regulating the ruble exchange rate was not its priority. RenCap analysts also note that the CBR has a lot of space to manoeuvre with the monetary policy as the financial system remains largely shut down.

Nabiullina confirmed this, noting that currently the key interest rate is not feeding through into the ruble exchange rate in the absence of capital outflows or inflows. However, she still believes that the monetary policy can stimulate demand for imports, which in the longer term will influence the ruble rate, too.

The imports have shown only slight recovery in the preliminary balance of payments data for May, as covered by bne IntelliNews.

“As imports will likely gradually recover in the following months, we expect the current account surplus to further narrow, although it will still remain quite strong. Taking into account the government's limited ability to sterilise FX liquidity and the restrictions on capital outflow, this could result in a further strengthening of the ruble,” Sberbank CIB commented.