Russia expelled from Council of Europe 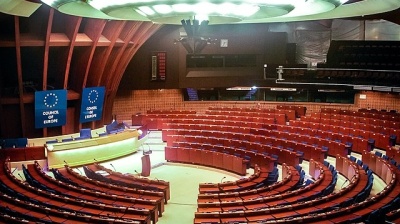 The Council of Europe passed a resolution condemning Russia's aggression in Ukraine after Russia announced its exit from the body earlier on March 15. / Image: wikimedia commons.
By bne IntelliNews March 16, 2022

As a result of its invasion of Ukraine, Russia has been removed from the Council of Europe. The body, created following WWII to protect human rights and peace in Europe, drew up the European Convention on Human Rights.

MPS from the 46 member countries of the Council of Europe passed a resolution stating that “In the common European home, there is no place for an aggressor”. Russia’s expulsion is more symbolic than practical, because it had already declared that it wanted to leave the body earlier on March 15.

Russia will now no longer be a party to the convention on human rights, nor will it be subject to the verdicts of the European Court of Human Rights. In the past, Russia has regularly breached the rules of the convention and ignored the judgements of the Court.

Russia has passed legislation allowing people to be imprisoned for up to 15 years for spreading what the state considers to be “fake news” about the Ukraine war. This includes describing the war as a “war” or “invasion”.

Russia has also cracked down on protests against the war, threatening demonstrators with prison time.

Russia’s government argues that the Council of Europe has become a western stooge, guilty of propagating “russophobic hysteria” at the bidding of Washington and Nato.

A draft of the declaration passed by the Council says: “The Assembly deplores that, despite the many appeals to cease the hostilities and to comply with international law, the Russian leadership has persisted in its aggression, escalating the violence in Ukraine and making threats should other States interfere. Through its attitude and actions, the leadership of the Russian Federation poses an open menace to security in Europe.”

Putin signs off annexation of four Ukrainian regions
3 hours ago
Kremlin preparing for a protracted conflict by putting Russian economy onto a war footing
7 hours ago
Hungary’s forint slides to new low after central bank ends tightening cycle
10 hours ago
Slovak ministers criticise Czech border controls
10 hours ago
Might Trussonomics be a branch of Erdoganomics?
16 hours ago