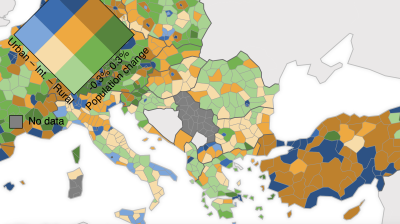 This comes in the context of the long-term decline in populations across almost all of emerging Europe, caused by a combination of low birth rates and outward migration.

The rural regions with the highest rates of depopulation were the Croatian regions of Vukovarsko-srijemska supanija (-2.5% per year) and Pozesko-slavonska supanija (-2.3%), and the Bulgarian region of Vidin (also -2.3%), the report said.

The demographic mix also changed in rural areas, where the number of people aged 65 or older grew by 1.8% each year – higher than the 1.6% recorded in predominantly urban and in intermediate regions.

At the same time, the number of working-age people (20-64 years) in predominantly rural regions dropped by an average of 0.6% each year.

In urban areas, the number of working age and young people increased by 0.1% and 0.3% a year respectively.

According to Eurostat, the figures suggest “that these people left predominantly rural regions to continue their education or in search for work.”