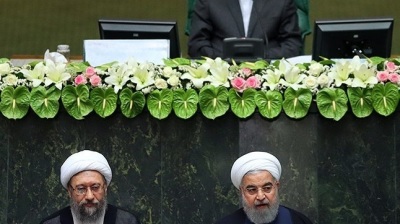 Rouhani (front, right) may be feeling the heat from hardliners who were always opposed to the nuclear deal. / Mahmoud Hosseini, Tasnim News Agency.
By bne IntelliNews June 26, 2018

Iranian President Hassan Rouhani on June 25 sought to reassure rattled Iranians that the government will be able to handle the economic pressure generated by the reimposition of tough new US sanctions.

Parts of Tehran’s Grand Bazaar, including the furniture market, were on strike for a second day running as the financial pain caused by a dramatic devaluation of the Iranian rial (IRR) since the Trump administration in May unilaterally withdrew from the multilateral nuclear deal hit home. Metro stations near the bazaar were closed for hours as a consequence of protests, state media reported. There were sporadic reports of strike action from shopkeepers in other cities including Arak, Shiraz, Tabriz and Kermanshah.

But Rouhani claimed the fall in the IRR was simply the result of “foreign media propaganda” and observed that the government’s income had not been impacted in recent months.

“Even in the worst case, I promise Iranians’ basic needs will be met. We’ve enough sugar, wheat and cooking oil. We have enough foreign currency to inject into the market,” Rouhani said in a speech broadcast live on state television.

He added that the new US sanctions were part of a "psychological, economic and political war," and vowed to make Washington pay a high price for its actions—actions which are not supported by any of the other major power nuclear deal signatories, namely the UK, France, Germany, Russia and China.

Appealing to Iranians to show unity in adverse circumstances, the president said: "The media, the scholars, the preachers, the seminaries, all those with a public voice, the parliament, the judicial system... we must all join hands."

"I assure you that if we can safeguard the two assets—hope and trust —we can overcome all problems," Rouhani added.

The pragmatic-centrist president may be feeling the heat from hardliners who say Iran should never have trusted the US enough to have signed the nuclear deal at Barack Obama’s urging two and a half years ago.

Iran’s hard currency earnings will be particularly exposed if the US succeeds with its plan to block almost all the Islamic Republic’s oil exports. But the International Monetary Fund (IMF) estimated in March that Tehran held $112bn of foreign assets and reserves, and was running a current account surplus. The country might thus absorb the sanctions without an external payments crisis. Indeed, data in the Central Intelligence Agency’s (CIA) December 2017 factbook edition testifies to the strength of Iran’s foreign currency reserves, outlining how the country has more than 156 other countries around the world including Norway, Australia and Turkey.

The government, meanwhile, is pushing ahead with plans to switch back towards a “resistance economy” by banning imports of more than 1,300 products that can be produced at home. The move will also mean less forex outflows.

Rial strengthens
By the close on June 26, the IRR had strengthened against the dollar on the unofficial market, reaching IRR79,500, an improvement of 13.5% on the rate seen two days previously.

The day also saw the government add a third official exchange rate of IRR65,000 to the dollar. It is to be applied to non-essential imports. Many traders had complained that they were unable to obtain the IRR42,000 rate which they said should have been available to them.

In all, the Central Bank of Iran (CBI) announced new official IRR rates for 39 currencies as of June 26.

IRR hedging targeted
In a related development, Iran’s National Tax has announced it is planning a new charge that will be applied to hedges taken out against the IRR via purchases of hard currency and gold sovereigns. The move is an effort aimed at cooling the profiteering engineered on the back of the depleting rial, IBENA reported on June 25.

The levy will be imposed on purchases of $5,000 or above. The charge rate is yet to be announced. It will likely go through several government committees across the next few weeks to be formalised.

The NTA said it would process people’s national tax codes while analysing who is profiting on the hard currency markets.

Gold sovereign purchases are also in for a hit because the new system under which people buy the coins has been brought under the watchful eye of the formal banking system.

Until recently, the gold and foreign currency markets were seen as safe bets which the taxman was not poking his nose into. But since 2015, the Rouhani administration has granted unlimited access to the tax authorities to investigate the bank accounts of citizens and their family members.