Romania’s ruling coalition at risk ahead of presidential election 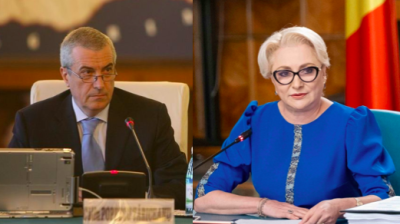 A rift is growing between the two members of Romania’s ruling coalition — the Social Democratic Party (PSD) and its junior partner the Alliance of Liberals and Democrats (ALDE) — after both parties picked their own leaders to run in this autumn’s presidential elections.

Romania’s senior ruling PSD has appointed Prime Minister Viorica Dancila as its candidate — and its experts believe she can make it to the second round against incumbent President Klaus Iohannis despite the party falling into third place in the polls.

The PSD approved Dancila as its candidate on July 23  after all the other potential candidates including popular Bucharest mayor Gabriela Firea withdrew from the race, Hotnews.ro reported, although her candidacy still has to be formally endorsed by the party at a congress on August 3.

Dancila has been on an outstanding upward trajectory within the PSD over the past year and a half after being installed as prime minister by her predecessor as party leader Liviu Dragnea. She was elected president of the PSD in June after Dragnea was imprisoned to serve a three and a half year jail sentence for corruption.

Meanwhile, ALDE is backing its own leader, Senate head Calin Popescu-Tariceanu, for the presidency, and he has already gone on the attack against the PSD.

In his first speech as a candidate, Popescu-Tariceanu fiercely criticised the PSD and warned that ALDE MPs might not vote in favour of the first budget revision expected at the end of July. “Some of the party’s members are inclined to break the alliance with the PSD,” Popescu-Tariceanu added, implying that there is not much he can do in this regard since the senior ruling partner breached the agreement on selecting a joint candidate for the presidential elections.

He also claimed there was a lack of transparency regarding the budget revision, saying there are some “awkward details” that ALDE ministers cannot understand and furthermore that ALDE was not briefed about the details of the revision.

The two parties were previously expected to unite behind a single candidate, but failed to do so. A meeting between Dancila, Popescu-Tariceanu and former prime minister and ex-PSD leader Victor Ponta, who now heads his own political vehicle, on July 22, aimed at reaching common ground on a single candidate, ended with no result, Ponta announced quoted by Liberatea.

“It was not a surprise, but a disappointment and will probably generate problems within the ruling coalition,” Popescu-Tariceanu stated when the news emerged of Dancila’s candidacy.

Popescu-Tariceanu also criticised the PSD for its “weak ambition” — simply to make it to the second round against Iohannis — and stressed that he aims to win the election.

While Iohannis leads in the polls, the vote on the centre right is also set to be split, as the president, supported by the National Liberal Party (PNL), will be competing with Union Save Romania (USR) head Dan Barna supported by the alliance between the USR and the PLUS party of former prime minister Dacian Ciolos, who is hoping to take the PM seat again.

Support for the PSD has been waning since it returned to power after the December 2016 general election, though Dancila has tried to turn it around after the double whammy of a poor performance in the European Parliament election and Dragnea’s imprisonment in May. The PSD was overtaken by the PNL in the European Parliament election, taking only around 25% of the votes which was considerably down from its performance in December 2016, while ALDE failed to meet the 5% threshold.