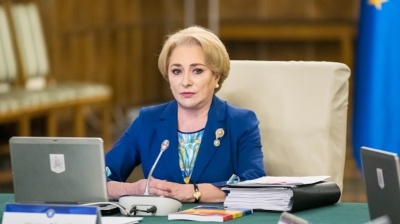 Result will strengthen the position of Prime Minister Viorica Dancila, who aims to lead the ruling Social Democratic Party after its former leader was sent to prison.
By Iulian Ernst in Bucharest June 19, 2019

Romania’s ruling coalition confirmed its majority in parliament once again on June 18, when it rejected the no-confidence motion filed by the opposition against the government of Prime Minister Viorica Dancila.

Although the outcome of the vote was expected, it is going to strengthen the position of the incumbent prime minister, who seeks to win the leading position within her party at the congress scheduled for the end of the month. She is among the candidates to lead the Social Democratic Party (PSD) after its former leader was sent to prison.

Dancila defended the performance of her cabinet, stressing that the public debt to GDP ratio dropped from 37% to 34% during her term, public investments increased by 10% y/y in January-May this year, public pensions have increased ahead of schedule, the wealth of Romanian households increased over the past couple of years while the risk of social exclusion declined and the real estate market is thriving giving a chance to Romanians to buy a home.

Compared to the previous two motions filed against Dancila, the opposition gathered a larger number of votes: 200, compared to the 233 votes needed for it to pass. The first motion fell in June 2018, voted by 166 MPs, and the second in December 2018 was rejected as well, with only 161 votes.

In their no-confidence motion, the opposition parties accused the ruling coalition of concentrating on amending justice laws with the final purpose of preventing the prosecution of corrupt politicians.

That many among the Romanian public see things the same way was confirmed on May 26, when the ruling coalition’s parties lost the elections for the European Parliament, and Romanians supported in large numbers the public referendum initiated by President Klaus Iohannis on tightening the rule of law, according to the opposition.

Separately, the motion also addressed the government’s poor management of the conflict between ethnic Romanians and Hungarians related to the military cemetery at Valea Uzului. This latter topic was most likely included in the text of the motion in order for the opposition parties to receive the support of the UDMR, which represents ethnic Hungarians in the country.