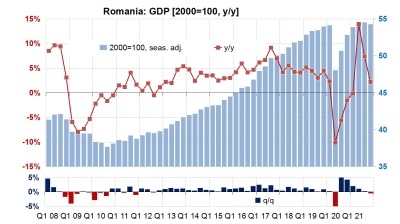 Romania’s annual economic growth deteriorated more than expected to 2.2% y/y in Q4, from 7.4% y/y in Q3 and 13.9% y/y in Q2, the statistics office INS announced in a flash estimate. In seasonally adjusted terms, Romania’s GDP dropped by 0.5% q/q in Q4, versus consensus expectations for positive growth of 0.8-1.0%.

Analysts are revising their projections for this year, with the expected growth rates dropping not much above 3%. Understanding the impact of the higher energy prices on economic activity is a key element in this process. Not only the lack of clarity on the government’s actions to mitigate the social impact, but also the impact of permanent higher energy prices on the economy are to be assessed.

Based on a limited number of short-term series, the flash estimates issued by INS are typically subject to subsequent revisions that may be quite significant during times of such high volatility. Former prime minister Florin Citu said he hopes that after revision, the full-year growth rate for 2021 will be around 6% — compared to 5.6% in the flash estimate.

For the full year, the economic growth was 5.6% in 2021, compared to 6.2% estimated by the state forecasting body CNP on February 11. Independent analysts were expecting even higher levels.

Notably, the revised seasonally-adjusted quarterly GDP figures indicate a thin 0.1% q/q advance in Q3 (revised from +0.4% q/q) and a steep 0.5% q/q contraction in Q4. Romania was thus close to a technical recession.

The seasonally-adjusted trajectory was revised downward for the first two quarters of last year as well, notably in Q2 from 1.5% to 1.1% q/q.

But the seasonally adjusted data may be misleading at times of such sharp variations that elude seasonality.

Under a more relevant metric, Romania’s unadjusted GDP rose by a modest 0.6% GDP (comparable prices) compared to the same period (Q4) of 2019.

The average growth rate calculated for the two-year period, 0.3% per annum, still reflects sustainable recovery after the ‘COVID quarter’ (Q2) of 2020 — but it is far from the optimistic expectations developed during the first two quarters of the year when the annualised GDP growth rate, calculated over a similar two-year period, rose above 1% per annum.

Rising energy prices may have been among the main causes of the economic slowdown visible through H2 2021. Such a re-alignment process undergone by the energy prices will most likely have a detectable permanent impact on the economic activity. The case for growth in Romania should thus be revisited starting from scratch, once the developments in the energy market gain clarity and the relative prices stabilise.