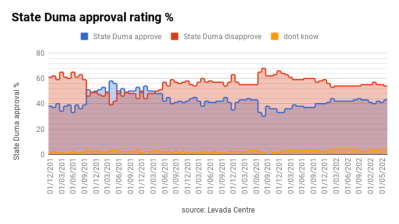 Russian President Vladimir Putin's popularity remains stable at 66%, but only 39% of Russians approve of the Duma as elections loom. / bne InteliNews
By bne IntelliNews July 19, 2021

Russian President Vladimir Putin’s personal approval rating remains stable having risen from 65% in April to 67% in May before falling back to 66% in June – a level it has been sitting at for most of the last decade.

Prime Minister Mikhail Mishustin’s approval rating has been a little more unstable, having sunk slow from 58% at the end of last year to 54% in June, although it jumped briefly to 59% in May.

The government’s approval has flip-flopped between a slight majority approval in May, with 51% giving the thumbs up vs 47% a thumbs down, and the reverse in June with a 47%/50% split.

The governors also remain extremely popular, with their approval rating rising to 63% in May – just below Putin’s popularity – before dropping back to 57% in June. The roll-out of coronavirus (COVID-19) restrictions has been a major factor in the changes here as various regions deal with the crisis differently.

The Duma remains the most disliked part of the government, with its approval rating falling to a mere 39% in June from 43% in May. That is the lowest level all year and down from the still poor result of 41% approval in January. The disapproval rate for the Duma was 57% in June, slightly higher than 55% that disapproved of it at the start of the year.

The number of Russians that think the country is going in the “right direction” has also decreased in the summer down to 49% in June from 51% in May, but at the same level as at the start of the year.

The number that think it is going in the “wrong direction” is up to 43% in June from 40% in May and at the start of the year.

Russia’s industrial output decline slows to only 0.1% in August
10 hours ago
Putin's popularity remains high, but even after a hit in September it is still at 77%
10 hours ago
Russia on track to have a record-smashing grain harvest
2 days ago
Bosnia posts annual CPI inflation of 16.8% y/y in August
2 days ago
IMF sees Romania’s economy growing by 4.8% in 2022, analysts are even more bullish
3 days ago