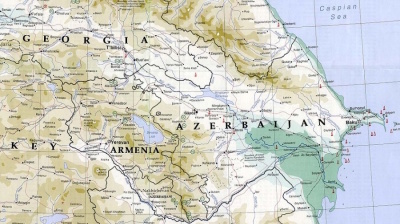 The summit statement neither touches on the Nagorno-Karabakh conflict nor mentions any details about Armenian POWs or the Zangezur corridor. / bne IntelliNews
By Ani Mejlumyan in Yerevan, Cavid Aga in Baku November 1, 2022

Armenian and Azerbaijani leaders pledged to "actively" work on a bilateral peace treaty but still need to iron out their differences on its critical provisions, following talks hosted by Russian President Vladimir Putin on October 31.

According to Putin, the two-hour trilateral meeting with Armenian Prime Minister Nikol Pashinyan and Azerbaijani President Ilham Aliyev was "very useful" because it created a "very good atmosphere for possible future agreements on some key issues".

However, the statement neither touches on the Nagorno-Karabakh conflict nor mentions any details about Armenian POWs, the Zangezur corridor etc.

"Today we agreed on a joint statement," he said after the meeting in Sochi. "I must say frankly that not everything was agreed upon. Some things had to be taken out of the text worked out beforehand at the level of experts," he added without elaborating.

In the statement, Aliyev and Pashinyan said they "agreed to refrain from the use of force or the threat of its use and discuss and resolve all problematic issues solely on the basis of mutual recognition of sovereignty, territorial integrity and inviolability of borders".

"On the basis of existing proposals, it was agreed to continue the search for mutually acceptable resolutions," said the statement. "The Russian Federation will render all possible assistance to this."

Putin signalled that 'unresolved issues' will not be publicly discussed: "It is not necessary to draw the attention of the press and the public to them, but just calmly seek agreement behind closed doors," he said later. "These are very subtle things, sensitive for both sides, and I do not consider myself entitled to stick out without the consent of my partners," Putin concluded.

"It is still premature to talk about the main components of the peace treaty, since this is still the subject of compromises which must be reached on both sides through mediation," Putin later said, answering the media's questions. "For our part, we always welcome any efforts aimed at a settlement. Therefore, as for how this correlates: it correlates quite naturally," he said, answering a question about how does the EU-organised tripartite meeting in Prague compare with the tripartite summit in Sochi, "And we support everything that is aimed at reducing confrontation and settlement."

During the Valdai Summit on October 27, Putin had made an inflammatory remark on the Western diplomatic offensive. "If the Armenian people and the current Armenian leadership consider it necessary to choose a version of the peace agreement, the so-called Washington variant, which as I understand envisages the recognition of Azerbaijan's sovereignty over Karabakh as a whole, that is if Armenia thinks that way – then go ahead," Russian President Vladimir Putin said on October 27. "We will support the choice of the Armenian people."

None of these plans is known, but so far, it is clear that Putin was unable to convince Aliyev to delay the status of the Karabakh issue, which is the most sensitive subject for the Armenian side.

The Russian Federation is ready to provide the most accurate maps of the Soviet General Staff to resolve the issue of demarcating the border between Armenia and Azerbaijan, Putin said. "We are ready to provide the maps at our disposal of the General Staff of the Soviet Army. These are the most accurate maps, as we understand. And we are ready to move on this base, discussing with both sides. We agreed that these contacts, these negotiations, these consultations will be continued," Putin said.

According to Putin, the decision to extend the mandate of the Russian peacekeepers in Nagorno-Karabakh depends on other issues – the possible conclusion of a peace treaty and the delimitation and demarcation of the border between Armenia and Azerbaijan. "If these issues are resolved, then the issue of peacekeepers will stand differently. If they are not resolved to some extent, then the fate of our peacekeeping contingent depends on it," he said, adding that Armenia and Azerbaijan "expressed their gratitude to Russia" for their work on the territory of Nagorno-Karabakh.

None of the parties made public statements right after the summit or their separate talks with Putin. The Sochi summit underscored Russian efforts to regain the initiative in the Armenian-Azerbaijani negotiating process, coordinated by the United States and the European Union in recent months. Moscow has been very critical of the Western mediation, saying it aims to "squeeze Russia out of the South Caucasus".