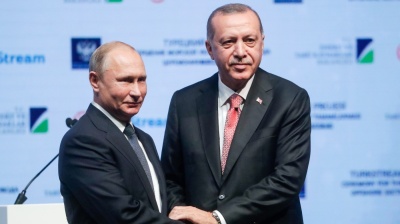 In a surprise move, Putin ordered a 36-hour ceasefire so that soldiers can celebrate Orthodox Christmas. / bne IntelliNews
By Ben Aris in Berlin January 5, 2023

In a surprise move, Russian President Vladimir Putin on January 5 ordered a 36-hour ceasefire in Ukraine in observance of Orthodox Christmas.

The truce, which begins on January 6 – Orthodox Christmas Eve – marks the first major ceasefire in the more than 10-month-long conflict in Ukraine that has caused tens of thousands of civilian deaths, devastated many cities and sent an estimated 200,000 Russian and Ukrainian soldiers to the grave.

In an order issued by the Kremlin, Putin stated that he was instructing Russian Minister of Defence Sergei Shoigu to introduce a ceasefire along the entire line of contact between the parties in Ukraine from 12:00 on January 6 until 24:00 on January 7.

He also called on the Ukrainian side to declare a ceasefire and allow Orthodox Christians in the areas of hostilities to attend services on Christmas Eve and Christmas Day.

Analysts suggested that Kyiv would refuse to observe the ceasefire, afraid that Russia would use the pause to consolidate its military position.

“Why would Ukraine comply? It is winning, it has momentum on its side. A ceasefire would crystallise Russian territorial gains and allow Russia time to regroup to launch further offensives further down the line. The West will not support this,” said Timothy Ash, senior sovereign strategist at BlueBay Asset Management in London.

Bankova was yet to comment on the Putin call for a ceasefire.

The announcement came only hours after Patriarch Kirill of Moscow, head of the Russian Orthodox Church, appealed for both sides in the conflict to observe a Christmas truce.

"Taking into account the appeal of His Holiness Patriarch Kirill, I instruct the Minister of Defence of the Russian Federation to introduce a ceasefire regime along the entire line of contact of the parties in Ukraine from 12.00 on January 6, 2023 to 24.00 on January 7, 2023," Putin said in the order, as cited by Reuters.

"Proceeding from the fact that a large number of citizens professing Orthodoxy live in the areas of hostilities, we call on the Ukrainian side to declare a ceasefire and allow them to attend services on Christmas Eve, as well as on Christmas Day," Putin said.

Some 80% of Russians profess to be Orthodox Christians, which follows the Julian calendar and celebrates Christmas on January 7. The Kremlin ignored earlier calls for a ceasefire on December 25, the day of the Catholic Christmas, which is an almost total non-event in most of Eastern Europe and a normal working day.

However, Ukrainian President Volodymyr Zelenskiy this year recorded a Christmas video message for December 25 and posed in front of a Christmas tree, despite the fact that most of Ukraine is also Orthodox. Zelenskiy also referred to the upcoming Catholic Christmas several times during his speech to the US Congress during a whirlwind trip to Washington only days before the holiday. Zelenskiy himself is Jewish.

Putin's ceasefire order was also issued only a few hours after the Russian leader finished a telephone call with Turkish President Recep Tayyip Erdogan, who also called for a ceasefire. Erdogan has been active in trying to broker a deal that would allow peace talks to begin and has repeatedly tried to bring Putin and Zelenskiy to Turkey for a peace summit.

“President Erdogan said that calls for peace and negotiations should be supported by a unilateral ceasefire and a vision for a fair solution,” Erdogan's office quoted him as telling Putin in the call.

A deal to allow for peace talk was almost struck in the first months of the war, but reportedly Zelenskiy rejected it after UK Prime Minister Boris Johnson flew to Kyiv and told the Ukrainian president that the West would not support it.

Erdogan was instrumental in bringing about the Istanbul grain deal in July that reopened Ukraine’s ports for grain exports. It was extended for another 120 days on November 17.

Erdogan also held phone conversations with Zelenskiy on the same day, where a number of issues were discussed.

However, Ukraine dismissed Kirill's appeal and Mykhailo Podolyak, a senior aide to Zelenskiy, referred to the Russian Orthodox Church as a "war propagandist" that had incited the "mass murder" of Ukrainians and the militarisation of Russia. There has been no immediate reaction to Putin's ceasefire announcement.

"The statement of the Russian Orthodox Church about the 'Christmas Truce' is a cynical trap and an element of propaganda," he said, as cited by Reuters.

Patriarch Kirill has been a controversial figure and has made several statements backing the warand encouraging Russians to fight for the army in the conflict.

Erdogan has skilfully positioned himself between the two sides. On the one hand, Turkey has refused to join the international sanctions against Russia and has massively expanded its trade with Moscow, becoming the main route into Russia for consumer goods and equipment that have otherwise disappeared from the Russian market due to self-sanctioning by international companies. On the other hand, Erdogan has refused to recognise Russia’s annexation of Crimea, the Donbas and two other regions annexed by Russia at the end of September.

According to readouts from their phone conversation, Erdogan discussed with Putin ensuring nuclear safety, as Europe’s biggest nuclear power station (NPP) is in the war zone, across the Black Sea from Turkey.

Erdogan also offered Zelenskiy immediate help with power supplies. The Turkish president said his country could sail shipborne power generators – each can supply 100 MW of electricity – to Ukrainian ports. Russia has knocked out half of Ukraine’s power generation capacity with an ongoing barrage of missile attacks that began on October 10.

Erdogan also conveyed messages between Putin and Zelenskiy on the possibility of exchanging hundreds of prisoners of war over Christmas, although no concrete progress was made on this issue. Last year, Zelenskiy secured the release of dozens of Ukrainian soldiers during the holiday period in a major PR coup.

Erdogan and Putin also reportedly discussed plans for the future of the grain corridor after the current deal for it expires on March 17. The Kremlin said the pair had talked about “the unblocking of food and fertiliser supplies from Russia” and the need for “the removal of all barriers to Russian exports.”

The pair also discussed the possibility of making Turkey a gas hub for Russian exports of gas to Europe. Erdogan’s office said that Turkey “has strengthened and will continue to strengthen the infrastructure” of the proposed hub. The two leaders hope to “implement [the project] as soon as possible,” Erdogan’s office said.

The two leaders also discussed Syria, with Erdogan telling Putin that “concrete steps” needed to be taken to clear Kurdish militants from the Syrian border region. "President Erdogan emphasised that concrete steps should now be taken to clear the terrorist organisation PKK/PYD/YPG from Turkey's border regions, especially Tel Rifat and Manbij," the readout said, according to Reuters.

“Putin again confirmed Russia’s openness to serious dialogue on the condition of Kyiv authorities fulfilling the well-known and repeatedly voiced requirements of taking into account the new territorial realities,” the Kremlin said in a statement.

This has widely been taken to mean that Kyiv would have to concede the occupation and annexation of the four regions by Russia – Donetsk, Lugansk, Zaporizhzhia and Kherson regions – something that Kyiv has made very clear it is not prepared to do. Kyiv’s position is that talks cannot start until Russian forces have quit Ukrainian territory completely, including the Crimea.

In the Turkish readout of Erdogan’s call with Putin, Erdogan said that both sides need to “take international law into account” but was not specific on which borders Russia needed to respect.

Putin accused the West of “destabilising” the situation with its military support of Ukraine. Erdogan added that both sides “can win battles, but in the long run everyone loses,” and repeated his call for a ceasefire.