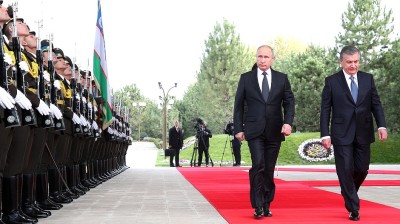 Putin was making his first visit to Uzbekistan since Mirziyoyev took office in late 2016.
By Kanat Shaku in Tashkent October 22, 2018

Russian President Vladimir Putin and Uzbek counterpart Shavkat Mirziyoyev on October 19 pressed a symbolic button together to launch a project to build Uzbekistan’s first nuclear power plant. Given that the Soviet-era nuclear plant in Kazakhstan was decommissioned in 2001 and is unlikely to be restored to operation, the facility is likely to be Central Asia's first new-era nuclear plant.

The Uzbek-Russian project will now conduct a geological survey to determine the best location for the planned 2.4 gigawatt nuclear power facility, to be operational by 2028 under current plans.

The launch of the project – but not the beginning of construction as some media reports dismissed by the Uzbek side have claimed – took place in a conference hall in Tashkent amid a state visit made by Putin to Uzbekistan. In all, the visit featured the signing of $20bn worth of contracts by Russian and Uzbek state entities and businesses.

The Uzbek government is targeting the generation of approximately 20% of the country's electricity from renewable energy sources by 2032. While Uzbekistan has previously announced plans for the manufacturing of photovoltaic solar power panels - including the work of the SkyPower global 1,000MW project - nuclear energy is set to account for much of the power (nuclear energy itself is considered a renewable energy source, but the material used in nuclear power plants is not).

“We expect that about 15% of [energy] generation [within Uzbekistan] by 2030 will be accounted for by nuclear energy generation,” director general of the Uzbek state-run UzAtom nuclear energy company, Zhurabek Mirzakhmudov, told bne IntelliNews on October 17. Uzbekistan has previously said that the first block of the nuclear power plant would be launched by 2028.

The project for the plant, planned to comprise of two “modern generation III + VVER-1200 units”, is also in line with Uzbekistan’s goal of boosting its energy exports to neighbouring countries, with a special focus on Afghanistan.

“[The power plant] will contribute to the energy stability not only of Uzbekistan, but of the entire region," Putin said, following the signing of contracts. He noted the plans to export energy produced at the nuclear power plant.

The countries of Central Asia are set to reunite their “single Central Asian electric loop”, according to Mirzakhmudov. Under the rule of his predecessor, the late Islam Karimov, Uzbekistan—Central Asia’s most populous nation with 33mn people—withdrew from the Central Asian energy system in December 2009, breaking the “loop”. The country’s return to engagement with its regional neighbours allows for Soviet-era infrastructural interlinkages to be put back into use.

Construction plans, costs not finalised
Kremlin aide Yuri Ushakov said on October 16 that the event with Putin and Mirziyoyev would mark the beginning of construction works for the nuclear plant, but Mirzakhmudov said that Putin’s visit to the Uzbek capital would only mark “the beginning of the project”, while construction was unlikely to start until at least 2020. And even that was an “optimistic” estimate, Mirzakhmudov pointed out.

UzAtom and Rosatom, which will eventually handle the construction of the nuclear power plant, have not yet finalised a concrete decision on a region for the project. Rosatom head Alexei Likhachev has previously said that the western Navoi region would be the most suitable territory for the construction of a nuclear power plant, but the Uzbek side has also suggested Jizzakh region as a potential site.

UzAtom is set to start discussions on an engineering, procurement and construction (EPC) contract in January 2019, said Mirzakhmudov.

The EPC is set to be funded by a soft loan from the Russian government and the Uzbek government’s own funds.

Ushakov also mentioned on October 16 that the costs of the project were to stand at $11bn, but Mirzakhmudov noted that the final costs would be subject to ongoing negotiations between the Russian and Uzbek sides.

Green energy and fuel
The new power plant will help save 3.5bn cubic metres of natural gas. The gas will likely end up being exported for approximate additional annual revenues of $550mn–$600mn.

“The reactors we selected... will help reduce emissions of CO2 by around 14mn tonnes per annum,” Mirzakhmudov posited. The figure appears to far exceed previously reported estimates which suggested a reduction of carbon monoxide emissions of around 3mn tonnes a year.

There still remains the question of long-term radioactive waste that the plant may produce, but UzAtom’s director general believes that technology geared towards recycling radioactive waste under development by the Russian side “will be available” for Uzbekistan “by the time we start running our NPP [nuclear power plant]”.

Another issue still under negotiation is the source of fuel for the plant – while Uzbekistan produces its own uranium, it remains unclear what the final conditions of the deal with Rosatom will amount to.

“We are considering an option where we supply our uranium to use on a tolling basis, to produce nuclear fuel [in Russia] and to supply back to our power plant,” Mirzakhmudov said.