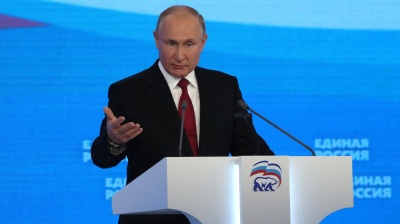 Putin says Russia to "use all the means at our disposal" in televised address.
By bne IntelliNews September 21, 2022

Russian President Vladimir Putin announced a partial mobilisation in Russia in a televised address broadcast early on September 21, marking an escalation of the military invasion of Ukraine.

Putin, claiming the Russian armed forces were facing the military of the collective West over a front line of more than a 1,000 km, even signalled that Moscow may be prepared to escalate the war further by using its nuclear arsenal, telling listeners he was not bluffing over nuclear weapons.

He accused the West of planning to destroy Russia and of threatening Russia with its own nuclear weapons and stated: "We have lots of weapons to reply – it is not a bluff."

"To defend the country and the people, we will use all the means at our disposal," he said, also saying: "Those who try to blackmail us with nuclear weapons should know that the prevailing winds can turn in their direction.”

The news comes amid reports of more Russian setbacks in Ukraine. Ukrainian troops continuing with a counter-offensive successfully liberated the village of Bilohorivka in Luhansk Oblast on September 19, breaking the total control of the region Russia established in July.

The president described the mobilisation decision as "fully adequate to the threats" facing the country. “Mobilisation is needed to protect the sovereignty and territorial integrity of Russia, and to ensure the safety of the people and people in the liberated territories," he said, as cited by RBC business portal.

"Only those citizens who are in the reserve, and above all those who have served in the armed forces, have certain military professions and relevant experience, will be called up for military service," Putin commented.

Those called up for service will undergo additional military training, "taking into account the experience of a special military operation," Putin said. Citizens who will be mobilised will receive the status, payments and social guarantees of contract servicemen, the president promised.

Defence Minister Sergei Shoigu has already announced that Russia will call up 300,000 reservists.

The Russian stock market took a sharp downturn at the news of mobilisation and there were reports of eye-watering hikes in plane ticket prices ahead of an expected surge in Russians wanting to leave the country.

As covered by bne IntelliNews, the Kremlin plans to quickly organise and hold “referendums” in the occupied regions of Ukraine, preparing swift large-scale annexation and escalation in reaction to the successful Ukrainian counter-offensive. Sham referendums will be held in Ukraine’s Donetsk, Luhansk, Kherson, and Zaporizhzhia regions, from which many inhabitants have fled, and the Kremlin will then claim they have voted to be absorbed by Russia.

Annexation following referendums would allow Putin to claim that he is actually waging a defensive war on sovereign Russian territories. However, the ability to manage large-scale mobilisation and train the recruits and sell that to the public at home is likely to prove a major challenge.

Ahead of Putin’s announcement, it was already clear the Russian authorities were moving closer to announcing a general mobilisation. The State Duma of the Russian Federation had introduced the concepts of “mobilisation”, “martial law” and “wartime” into the Russian Criminal Code and imposed a penalty of up to 10 years in prison for voluntary surrender, The Kyiv Independent reported.

Russia’s mobilisation was a predictable step that would prove extremely unpopular, while it underlines how the Kremlin's "unprovoked war" was not going according to Moscow’s plan, Ukrainian presidential adviser Mykhailo Podolyak told Reuters.

On the eve of Putin's televised address, US President Joe Biden's national security adviser Jake Sullivan said: "Russia is throwing together sham referendums on three days' notice, as they continue to lose ground on the battlefield and as more world leaders distance themselves from Russia on the public stage, and Russia is scraping for personnel to throw into this fight."

French President Emmanuel Macron said the proposed referendums "will have no legal consequence". He described the process as "a parody".

RIA Novosti news agency in Russia reported Defence Minister Shoigu as saying in a separate speech that “mobilisation is necessary to control the 1,000-km line of contact, as well as the liberated territories”. He also pledged that “under no circumstances" would students or conscripts be asked to serve.

Former British ambassador to Russia Tony Brenton told Sky News that until now the Kremlin had not fully mobilised because "Putin was worried about the effects on Russian public opinion". But, he said, setbacks in the field had changed the calculus.

In initial reaction from Beijing, China’s foreign ministry urged all parties to engage in dialogue and consultation and find a way to address the security concerns of all parties.