Protesters set up 100 tents to occupy main boulevard in Chisinau 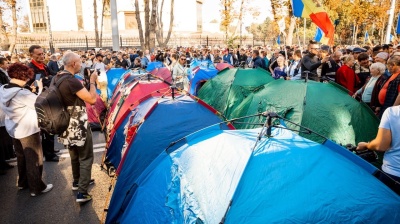 The central avenue of Chisinau, Stefan cel Mare, has been blocked by protesters organised by fugitive businessman and politician Ilan Shor, who put up about 100 tents on the roadway on October 9.

Shor’s supporters have been protesting in Chisinau for several weeks, calling for the resignation of the authorities and for snap elections. The latest protest led to a standoff between Chisinau City Hall, the police and the government over the removal of the tents. The ruling pro-EU Party of Action and Solidarity (PAS) has accused Chisinau mayor Ian Ceban of encouraging the protesters.

The police claim they can do nothing unless the City Hall, controlled by Ceban, instructs the law enforcement bodies to take action. Ceban in his turn claims it is Police’s duty to take action.

Ion Ceban began his political career as a Communist activist in 2004 and later he followed former president Igor Dodon into the Socialist Party. Ceban won the second round of the election for the position of mayor of the capital, in the general local elections of October 2019, being nominated by the Socialist Party.

Last year, Ceban decided to set up his own party. Many suspect him of developing a new pro-Russian political project. After joining the Socialists, Ceban began promoting Russian Orthodoxy and the so-called “traditional values”. He advocated against signing the Association Agreement with the EU.

Chisinau police reported that they had already applied six times to the mayor's office with a request to oblige the organisers not to block traffic. It remains unclear, however, whether they are really unable to force protesters to comply with the specifications in the permit issued by the City Hall — which is unlikely to allow for installing tents on the roadway.

“The mayor's office representative chose to leave the place of protest without taking the necessary measures. We call on the Chisinau City Hall, in accordance with the law on public assemblies, to order the immediate unblocking of traffic along Stefan cel Mare Avenue by removing the tents,” the police said.

The General Inspectorate of Police already complained to the prosecutor's office about the Chisinau mayor's office because a representative of the mayor's office did not want to intervene during a previous protest by the Shor party on October 2.

In return, the PAS promised to take action and stop the protests.

“Mayor Ceban, as far as we can see, is not going to fulfil his obligations stipulated by the law, and is turning into an accomplice of Shor. Ion Ceban must immediately cancel the permit and not be an accomplice in violating the rights of other citizens,” PAS MP Radu Marian warned in a Facebook post.

The street protests are not expected to succeed in overthrowing the government, given the PAS’ solid majority in parliament, but they are increasing tensions in the country.