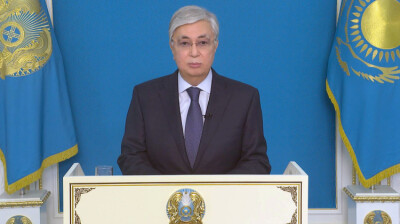 Kazakhstan’s president on January 5 threatened a ruthless crackdown set to be assisted by Moscow and other ex-Soviet states as the authorities suffered a day of setbacks in attempting to bring the anti-regime protests that have swept the country under control.

Kassym-Jomart Tokayev spoke in a televised address after protesters stormed and seized the airport of largest Kazakh city Almaty and interior ministry officials said that amid the nationwide unrest there were several deaths and more than 300 injuries among law enforcement officers and National Guard troops. There were also unverified reports that some soldiers and police officers had switched sides and of protesters raiding an armoury, taking away weapons including grenade launchers.

Also—with Russia’s Tass reporting that the president’s residence in Almaty was engulfed in flames and the city’s government HQ, which includes the mayor’s office, was burning from top to bottom—it was announced that Tokayev was stripping Nursultan Nazarbayev of his role as head of the State Security Committee, successor to the Soviet-era KGB, and taking the post himself. Tokayev also fired Nazarbayev's nephew as No. 2 at the State Security Committee.

The moves are highly significant. The 81-year-old Nazarbayev, who ruled Kazakhstan for nearly three decades before handpicking Tokayev to replace him in 2019, has been widely seen as exercising sometimes decisive power from the shadows. One report, from Kyrgyzstan’s AKIpress, stated that Nazarbayev was ready to leave Kazakhstan “for medical treatment”. It cited Alexey Venediktov, editor-in-chief of Echo of Moscow radio, who referred to a source in the Russian Foreign Ministry. A private plane of Nazarbayev's daughter Dinara and her husband, oligarch Timur Kulibayev, reportedly departed for Kyrgyzstan, with other Nazarbayev family members possibly on board.

A bne IntelliNews correspondent in Almaty said there was speculation that Tokayev was also replacing other key officials with loyalists and that the outcome of the turmoil might eventually be described as a "coup". He noted that the TV channel run by Nazarbayev’s daughter Dariga, KTK, had gone off air and stopped broadcasting.

There were also reports that the worsening situation in Kazakhstan—part of Russia’s immediate backyard that Moscow regards as its sphere of influence—led to Tokayev discussing what was happening in a call with Belarusian President Alexander Lukashenko, who prior to speaking with Tokayev spoke on the phone with Russian leader Vladimir Putin.

Tokayev confirmed during a televised address that he had appealed for help from the Collective Security Treaty Organization (CSTO), a military alliance of Russia, Belarus, Armenia, Kazakhstan, Kyrgyzstan, and Tajikistan. It was later announced by the Kremlin that the CSTO has agreed to send "peacekeeping forces" to Kazakhstan.

Security forces on January 5 lost many key pitched battles with the thousands of protesters storming towns and cities up and down the country, while communications monitors said a national-scale internet blackout was in effect amid the state of emergency declared in much of the country.

In his afternoon televised address, Tokayev said he had no plan to flee the country’s capital, Nur-Sultan, declaring: “As the head of state … I plan to act as severely as possible. This is a question of the safety of our country. I am certain that the people will support me.”

He described those behind the protests as "financially motivated plotters" and said foreign-trained "terrorist" gangs were seizing buildings, infrastructure and weapons,.

Earlier, Tokayev accepted the resignation of the entire government, but Kazakhs were only taking that move as little more than symbolic given the reality that real power is held by the regime. In further comments, Tokayev blamed the protests on “destructive individuals who want to undermine the stability and unity of our society”.

Dmitry Peskov, Putin’s spokesperson, said it was important no foreign countries interfered in Kazakhstan. “We hope for the earliest possible normalisation of the situation in the country, with which Russia is linked by relations of strategic partnership and alliance through fraternal, human contacts,” the Russian foreign ministry said in a statement.

Expressing concern over the situation, White House press secretary Jen Psaki said Russian accusations that the US had instigated the unrest were "absolutely false".

About a fifth of Islam-majority Kazakhstan's population are Russians, the descendants of those who moved there in the Soviet era.

Russian news site Lente.ru reported that a Russian military Il-76 transport plane, of the type usually used for moving supplies and people, had landed in Almaty.

Sky News reported the Almaty police chief as claiming "extremists" were attacking the city and had "beaten up 500 civilians". The police in the city, Kazakhstan’s commercial capital, were joined by units from the National Guard and army as they attempted to restore order.

In a press release, Amnesty International’s Eastern Europe and Central Asia director, Marie Struthers, said: “The protests unfolding in Kazakhstan, which have turned violent, are a direct consequence of the authorities’ widespread repression of basic human rights. For years, the government has relentlessly persecuted peaceful dissent, leaving the Kazakhstani people in a state of agitation and despair.

“Instead of threatening to crack down on protesters, the Kazakhstani authorities must resolve the situation peacefully by immediately and unconditionally releasing all those who have been arbitrarily detained and addressing past abuses committed by the state.”

A report from a Guardian correspondent in Kazakhstan quoted 55-year-old Zauresh Shekenova, who has been protesting in Zhanaozen since January 2, as saying: “Nazarbayev and his family have monopolised all sectors, from banking to roads to gas. These protests are about corruption."

“It all started with the increase in [liquefied petroleum] gas prices but the real cause of the protests is poor living conditions of people, high prices, joblessness, corruption,” she added, referring to LPG, used by many Kazakhs as a cheaper vehicle fuel.

A FRANCE 24 Observers team spoke to a Kazakh from Almaty currently studying abroad. The interviewee, who was interviewed on condition of anonymity, has been keeping in touch with relatives back home.

Abai (not his real name), said: “The initial demands [from protesters] were towards gas prices and food prices. But now it’s more political. People are demanding the reform of the whole government. The unhappiness with the current regime has been around for at least the last 20 years. The coronavirus crisis was kind of the last straw. Standards of living are falling drastically. People are barely able to survive. I guess there are a lot of people who have nothing to lose anymore. Our generation is disillusioned with the future. We are worried for our children.

“Our people have always been aware of our own docile attitude towards life. I would never believe that we would rebel en masse like this. Plus, the law in recent years has made [protest] impossible. There is a paragraph saying that every public meeting or protest should be approved and agreed upon with the local government, which they never do. So the only available outlet for public outcry would be to do it unlawfully. If you participate in any kind of protest, you automatically break the law and police can absolutely legally arrest you.”

He added: “As I was talking to [my relative] I heard explosions going off. There are teargas grenades, but also some police cars that have been overturned and destroyed and burned. All of the citizens are a bit taken aback at how quickly it became violent. We are all extremely shocked, and we’re scared that we’re going to lose our independence, that maybe neighbouring countries like the big powerhouses Russia or China, or whoever else in the West, might spin this situation in their interest.”

First official results from Bosnian elections put nationalists ahead after exit polls predicted losses
9 hours ago
Georgian MPs want to rid the country of oligarchs, but not all of them
10 hours ago
Hungary agrees on deferred payments with Gazprom for winter gas deliveries
10 hours ago
US sanctions Russia’s CBR head Nabiullina and other officials
10 hours ago
Russia prepares for new attacks against Ukraine from Belarusian territory
10 hours ago