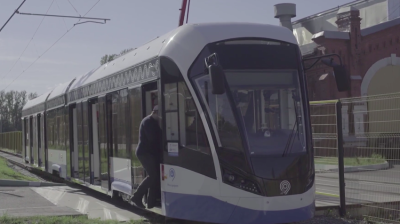 The self-driving vehicle is equipped with “an AI-based computer vision system, up to 20 video cameras located around the perimeter of the vehicle, up to 10 radars, GPS sensors and high-precision cartography.” (see video)

Thanks to this equipment, the self-driving tram will “stop in front of the obstacles and maintain a safe distance to the cars ahead.”

“The combination of sensors that include cameras and radars ensures an accurate and reliable detection of road scene objects in any weather conditions (night, rain, fog, snow, blinding light etc.). The Cognitive Low Level Data Fusion technology that is developed by our engineers allows the computer vision model to efficiently use all the combined ‘raw’ data coming from cameras and radars,” RailTech.com quoted Cognitive Technologies chair Olga Uskova as saying.

The new 4D radar developed by Cognitive Technologies for driverless cars “surpasses humans in analysing road conditions.” Working “at any speed,” the company’s first prototype can determine the location, shape and speed of objects on the road in any weather conditions, according to company statements.

“It’s like a ‘third eye’ for the driverless vehicle,” said Uskova in a recent exchange with Russia Beyond, calling the invention “a revolution” for the entire automotive industry.

The two-month trials of the self-driving tram will start soon in Moscow, with a regular service scheduled for 2021. The vehicle has been designed for use on domestic and foreign markets equally.