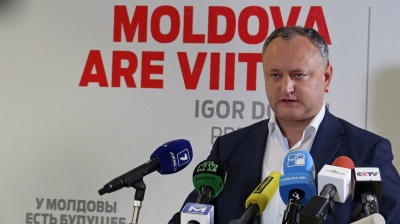 Pro-EU candidate Maia Sandu is likely to defeat incumbent President Igor Dodon in the second round of the November 1 presidential elections, according to a poll conducted for WatchDog.MD organisation.

In a second round, Sandu would get more votes than Dodon, with 29.2% of the voters expressing a preference for her in case of a runoff between the two, compared to only 25.8% votes received by Dodon.

In the first round, 17% of the voters polled would back Dodon, while 13.3% would vote for Sandu, according to the poll.

Dodon’s Socialist Party (PSRM) would get 12.4% of the votes, followed by Sandu's Party of Action and Solidarity (PAS) on 11.4% and Renato Usatii’s Partidul Nostru (Our Party).

Sandu is challenging Dodon for the second time in the November 1 presidential elections, after she lost in 2016 by a narrow margin amid fierce attacks from both Dodon and Vlad Plahotniuc, at that time the leader of the ruling Democratic Party but now a fugitive yet reportedly in contact with Dodon.

However, the pool of disappointed voters who did not disclose their preference (or don’t have one) is massive: 34% are undecided and 6% would not take part in the vote.

As regards the most trusted politician, nearly three quarters of Moldovans refused to name one. As many as 63% stated firmly that they trust none of the politicians and 13% avoided providing an answer.

Consequently, 34% of those polled trust no politician but are ready to support a presidential candidate.

Among the 24% Moldovans who have a favourite politician, 9.2pp trust President Igor Dodon, 7.9pp trust Maia Sandu and Renato Usatii is seen as trustworthy by 2.6pp.

Maia Sandu, the pro-EU candidate in the Moldovan presidential election, confirmed that she has the same goal as Renato Usatii, who came third in the first round with 17% of the votes, namely calling ... more

Russian law enforcement officers have completed the investigation into a criminal case on the withdrawal of over RUB500bn (€5.7bn) from the Russian Federation through a Moldovan bank in 2013-2014, ... more