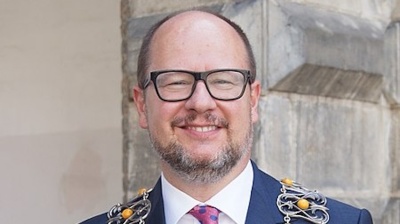 In a moving spectacle, some 45,000 people bid their final farewell to Pawel Adamowicz, the mayor of Gdansk, on January 19, one week after he was shockingly assassinated while taking part in a charity event.

Some powerful eulogies echoed in the 14th century St Mary’s church in downtown Gdansk where the mournful crowd of thousands of Gdansk people, who handed Adamowicz another term as their mayor only last October, stood in silence.

Adamowicz was 53 and had been Gdansk’s mayor since 1998. On the fateful evening, Adamowicz was onstage to thank people for supporting Poland’s famous nationwide charity event, the Great Orchestra of Christmas Charity. Each January since 1993, the Orchestra raises money to buy hospital equipment to treat sick children or help newborn and infant care.

“This is a wonderful time to share what is good. You are lovely and Gdansk is the most wonderful city in the world. Thank you!” Adamowicz called from the stage. He was attacked moments later. His wounds proved fatal on the following day, January 14.

A minute or so of confusion ensued after the attack, long enough to allow the assailant to seize a microphone from an event staffer.

“I was innocently jailed, Civic Platform [Adamowicz’s former party] tortured me, that’s why Adamowicz had to die,” the killer shouted from the stage in a moment of triumph.

The attacker had left prison in December after completing a 5.5-year term for several bank robberies. Evidence quickly emerged that the 27-year old Gdansk resident had a history of mental illness, which might explain his triumphant gestures and the boastful proclamation.

But literally invoking the name of Poland’s biggest opposition party – which Adamowicz recently left – also incited speculation that the killing was an act of political terrorism.

Questions flew: did Poland’s political divisions feed the assassin’s personal and, possibly, illness-fuelled grudge against Civic Platform and Adamowicz? Specifically, did the public media, which the government of Law and Justice (PiS) has made into ruthless propaganda outlets, play a role?

The killer’s trial might shed more light on his motivations but no matter how many calls there have been not to make the tragedy in Gdansk political, it has become exactly that.

That is hardly a surprise in the year of two elections: to the European Parliament in May and to the domestic legislature in autumn. As the votes loom closer each week, the political fighting – destined to be divisive anyway – is now likely to become even more intense in the wake of the tragedy in Gdansk.

For the liberal opposition, Adamowicz’s senseless death will likely cause it to lash out at PiS for creating a toxic political atmosphere in which no means can be spared to attack opponents.

Adamowicz was a case in point indeed: the government media regularly attacked him for alleged financial shenanigans, typically without giving him a platform to respond. But he was also under fire for making Gdansk open to refugees and LGBT people – all too much to stomach for conservatives in PiS and groups further to the right.

One such group, the borderline fascist All-Polish Youth, had even produced a “certificate of political death” signed by the “Polish nation” for Adamowicz.

“I did not expect I would receive a real death certificate for my brother,” the mayor’s brother Piotr Adamowicz said in his eulogy.

The assassination has complicated PiS strategy for the election year. The ruling party cannot budge, as it would mean admitting responsibility and empowering the opposition in the crucial months ahead of the vote.

Whatever positive conclusions PiS might draw appear not spectacular enough. The ruling party seems unlikely to produce good legislation on safety at mass events – it was close to non-existent in Gdansk – or improving the system of psychiatric care. PiS has a track record of very poor legislation.

Unwilling to budge and incapable of drawing positive practical lessons from the assassination, PiS will likely escalate tension and direct charges of inciting hatred in public debate back to the opposition. That would not be for the first time.

After the tragic crash of the presidential plane in Smolensk, Russia, that killed President Lech Kaczynski and 95 other top officials on board in 2010, the shock subsided fast.

Smolensk laid the foundation for today’s divisions after PiS had pushed a theory that the crash was, in fact, an outcome of a plot to kill Kaczynski, implying Civic Platform and Russia were complicit. That was PiS crossing the Rubicon. There could be no turning back: if you killed our president, we will not rest until we crush you, the ruling party seemed to say.

PiS-run public television TVP ran material on Adamowicz’s death hours after it was confirmed. The story focused on hate speech in public debate in Poland and the only examples came from politicians of Civic Platform.

“I am convinced that Pawel would want me to say the following words. We must end hate. We must end hate speech. We must end contempt. We must end baseless accusations against others,” Dominican priest and former anti-communist activist Ludwik Wisniewski said in a eulogy followed by long applause from the mourners inside the church and those out in the streets around it.

In what will ultimately prove a disgrace to the memory of the late mayor Adamowicz, it seems only likely the call will fall on deaf ears.