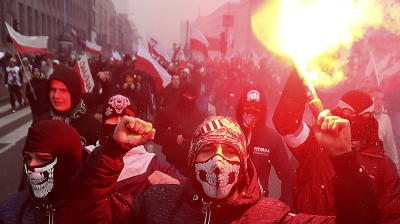 Polish neo-Nazis have been emboldened by the Law and Justice government.
By Wojciech Kosc in Warsaw February 6, 2018

Polish President Andrzej Duda has signed off on the highly contested "Holocaust bill" that has alienated Warsaw from Israel, the US, as well as Ukraine.

The bill seeks to penalise claims that Poland was complicit in atrocities perpetrated by Nazi Germany during the Second World War. That has caused outrage in Israel, which said the bill could lead to falsehoods concerning Poles’ wartime attitude to Jews under the Nazi occupation of Poland.

The bill states that anyone who “publicly and against the facts ascribe responsibility or co-responsibility for the crimes perpetrated by the Third German Reich to the Polish nation or the Polish state” will face prosecution charges and possibly jail.

Thousands of Poles helped Jews survive the occupation, during which the Nazis exterminated over 90% of Poland’s Jewish population. However, there also are numerous examples of Poles’ turning Jews in to the Nazi administration or directly killing them. Those atrocities have been documented in accounts of witnesses, historical research, and books, which Israel suggests might be silenced now.

Poland dismisses Israel’s concerns. The bill will not result in censorship of scientific research, Duda underlined. Still, since there are doubts that the bill could restrain freedom of speech, he said he would send the bill to the Constitutional Tribunal for review. “There are fears that the survivors will not be allowed to speak out,” the president admitted.

The tribunal is, however, seen as a policy tool for the ruling Law and Justice (PiS) since the party overhauled its line-up to ensure a loyalist majority. It appears unlikely that the tribunal would decide on any changes in the bill, which is now going to enter in force anyway, following Duda’s sign-off.

Israel’s early reaction to the president’s decision was timid. “Israel has noted that the Polish President had deferred the law to the Constitutional Court for clarifications and amendments,” the Israeli’s foreign ministry said on Twitter. “We hope that within allotted time until the court’s deliberations are concluded, we will manage to agree on changes and corrections. Israel and Poland hold a joint responsibility to research and preserve the history of the Holocaust,” the ministry added.

The Nazi Germany-orchestrated killing of approximately six million European Jews – including nearly all of Poland's three million Jews – happened for the most part in Germany-occupied Poland. Warsaw has long objected to the Western media’s use of phrases such as “Polish death camps” for extermination camps that the Nazis set up on Polish soil in the 1940s. The campaign for accuracy in describing the atrocities has been largely successful, with major US media taking care not to use the inflammatory wording.

However, the current rightwing Law and Justice government considers these efforts insufficient. The ruling party claims Poland is regularly besmirched by accusations of its complicity in the Holocaust.

Poland’s attempts to contain the international controversy about the bill have been plagued by bad luck and apparent lack of preparation. A televised statement by the Polish Prime Minister Mateusz Morawiecki was wrongly translated on YouTube by the video service’s automated translation service to say that the death camps were in fact Polish.

Morawiecki also tweeted a bizarre analogy of Poland's role during the Nazi extermination of the Jews: "A gang of professional thugs enters a two-family house. They kill the first family almost entirely. They kill the parents of the second, torturing the kids. They loot and raze the house. Could one, in good conscience, say that the second family is guilty for the murder of the first?"

On the evening preceding Duda’s announcement, a group of nationalists rallied in front of the president’s place urging him to sign off on the bill and shouting anti-Semitic slogans.

The bill has sparked anger in the US and Ukraine. “We are concerned about the repercussions this draft legislation, if enacted, could have on Poland’s strategic interests and relationships – including with the United States and Israel,” the US State Department said on January 31.

The bill also sparked anger in Ukraine for targeting Ukrainian nationalist ideology, a long-standing divisive point in the relationship between Warsaw and Kyiv. For Ukraine, nationalists were patriots who fought for independence. In Poland, however, they are largely seen as mass murderers.

The bill has now worsened Poland's relationships with countries with which it has had strong and friendly ties: the US, Israel, Ukraine, as well as with the European Union, with which Warsaw feuds over the reform of the judiciary. Virtually the only voices of support for the proposed bill came from the Russian parliament, the Duma, and the pro-Russian Chechen leader Ramzan Kadyrov.