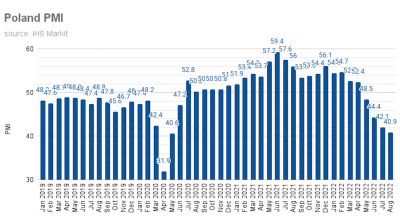 Poland's Purchasing Managers' Index (PMI) dropped 1.2 points to 40.9 in August (chart), the fourth time in a row when the index fell below the 50-point mark separating contraction from growth, the economic intelligence company S&P Global said on September 1.

That made companies cut employment for a third month in succession in August while confidence about the future remained “subdued”.

High inflation was widely reported to be eroding purchasing power, with sales down from both domestic and international sources. That said, costs and charges continued to rise at slower rates.

“In response, firms subsequently chose to batten down the hatches amid growing recession fears – which weighed on confidence - cutting their inventories and jobs in a bid to minimise costs. This was especially relevant at a time when input price inflation remains elevated, despite showing further signs that cost pressures have passed its peak,” Paul Smith, Economics Director at S&P Global Market Intelligence, said in a statement.

Polish analysts – of which some said about the August reading of the index that it might have painted an overly bleak picture of the industrial sector – now see the PMI pointing much more clearly to a scenario of a technical recession of two quarters of negative q/q growth.

“Today’s PMI data for the manufacturing sector support our scenario in which the quarterly GDP growth in Q3 2022 will be negative, which means that Poland would go into a so-called technical recession,” Krystian Jaworski, an economist with Credit Agricole Bank Polska said.

“The data clearly shows the direction in which Polish manufacturing is headed and the challenges it is facing: a sharp reversal in the inventory cycle, a sharp slowdown in demand, and a significant increase in energy costs,” bank PKO BP said.

The actual scale of economic slowdown, or even recession, will only be clear once real data for the entire third quarter drop.

If past performance of the PMI index is anything to draw lessons from, it did overestimate the depth of the slowdown during the worst of the COVID-19 pandemic.

But as slowdown is definitely on the cards – with the debate focused on just how deep it is going to be – the hawks in the National Bank of Poland are less likely to call the shots at a meeting next week.

“The data require caution with interest rate hikes, which should limit inflationary pressure. We assume that the NBP will raise the rates by 25bp to 6.75%,” PKO BP said.

Meanwhile, Poland’s industrial production eased growth to 7.6% y/y in constant prices in July, after a gain of 10.4% y/y the preceding month, unadjusted data from statistical office GUS showed on August 19.

Still, thanks to a strong first half of the year, Poland is going to see its GDP expand around 4%-5% in 2022 anyway before expansion eases to roughly 3% in 2023, with caveats attached to the outcome – if any – of the war in Ukraine and the long-term effects of the NBP's aggressive monetary tightening campaign.