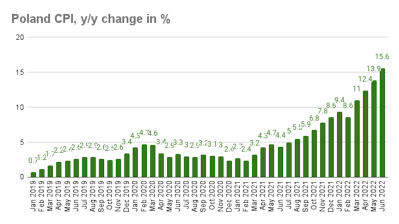 Polish CPI inflation picked up 1.7pp to 15.6% y/y in June, the statistical office GUS said in a flash estimate on July 1.

The reading is in line with consensus and, with core inflation growth likely easing to below 1pp for the first time this year, CPI expansion may be nearing its peak, analysts say.

With Poland’s PMI index dropping to the lowest point since the worst of the pandemic in early 2020, the National Bank of Poland might ease the pace of its monetary tightening campaign next week.

“The weaker rise in core inflation, coupled with increasingly convincing signs of a potentially deep economic slowdown, suggest a smaller-scale move [by the NBP],” PKO BP said in a comment.

That said, forecasting inflation's peak is laced with uncertainties.

“We expect inflation peak in August/September at slightly above 16% y/y. The precise forecast of the inflation peak is subject to high uncertainty due to difficulties in estimating the effects of the war in Ukraine on the food market, as well as the EU's policy of becoming independent of hydrocarbons imported from Russia,” Bank Millennium said in a comment.

Unsurprisingly, the increase in the inflation rate came on the back of growth in all major components, GUS showed in the breakdown of the data.

The NBP’s hiking its reference interest rate next week is virtually certain. That will be the ninth successive increase in as many months. The market consensus remains for a 75bp push that will land the interest rate at 6.75%. It was 0.1% only in October.

The target rate level is currently seen at 7%-8%, with numerous risks to the upside.

In monthly terms, the CPI increased 1.5% in June, the expansion easing 0.2pp versus the preceding month.

Prices of food and non-alcoholic drinks eased growth to 0.7% m/m, while the gain in prices of energy eased to 3% on the month. Fuel prices, in contrast, accelerated their expansion to 9.4% m/m.