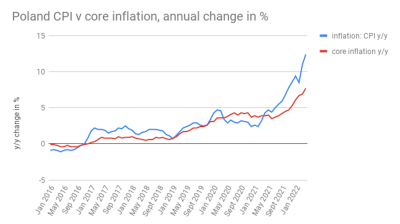 Poland’s core inflation, which measures price growth without food and energy, grew 0.8pp to 7.7% y/y in April, the National Bank of Poland (NBP) said on May 16.

Headline inflation in Poland has been elevated for months, with CPI growth coming in at 12.4% y/y in April, as the war in Ukraine impacted the prices of energy and fuels heavily. The increasing costs of energy are currently spilling over to push up prices in several other segments of the economy, ING notes.

The outlook for inflation assumes further growth in the next few months to 14% y/y -15% y/y, unless the prices of energy commodities spiral out of control due to the EU’s carrying on with an embargo on Russian oil and gas.

With double-digit headline inflation and accelerating core inflation readings, the National Bank of Poland (NBP) is expected to keep on tightening monetary policy in the months to come.

The central bank has raised its reference interest rate eight times in as many months between October and May from the all-time low of 0.1% to 5.25%.

Analysts are uncertain as to the target level of interest rates. The current consensus is for the tightening cycle to stop at around 7%.

In m/m terms, core inflation grew 1.3% in April, the NBP data also showed, the third consecutive month with a monthly growth of at least 1% y/y.