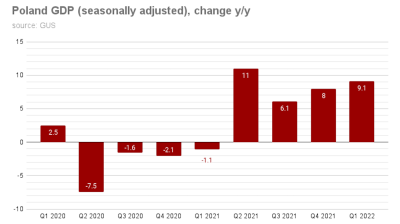 Polish GDP expanded a seasonally adjusted 9.1% y/y in the first quarter, picking up from a gain of 8% y/y in the preceding three months, the Central Statistical Office (GUS) said in a flash estimate on May 17.

Robust growth is still the ripple effect of very solid activity in the second half of 2021 and puts Polish economy on a path to an expansion of even 5% in the entire 2022, analysts say.

The incoming high-frequency macro data for April – specifically industrial production, retail sales, and construction, all due this and next week – will provide a clearer picture of the war’s impact on the economy in Q2.

That said, growth in Q1 comes in slightly below consensus, likely owing to a slowdown in investment demand, which soured in response to Russia’s aggression on Ukraine in late February.

Consumption growth likely eased as well, PKO BP notes, as the inflation shock could have moved demand to goods at the expense of companies offering services, accommodation, restaurants, and entertainment in particular.

Still, there is little doubt that the effects of the war in Ukraine will bite eventually, as high inflation dampens spending and export sectors soften, Capital Economics note.

A large contraction is unlikely in Poland, however. “The upside risks to our GDP growth forecasts in [Poland] have increased,” Capital Economics said.

Continued robust growth concurrent to a tight labour market and high inflation means that the National Bank of Poland is far from ending its tightening cycle.

After raising its reference interest rate from 0.1% to 5.25 between October and May, more hikes are widely expected, taking the interest rate up to 7% this year. That, in turn, will facilitate GDP growth easing in the second half of the year but it appears unlikely that the slowdown will be huge.

GUS’ flash estimates do not provide a detailed breakdown of growth drivers. Those are due on May 31.

In unadjusted terms, Poland’s GDP expanded 8.5% y/y in Q1 versus a gain of 7.6% y/y in October-December, GUS data also showed.

At the end of July 240,706 Czechs were seeking employment through Czech authorities, Czech Labour Office’s latest data show. This figure is 9,397 more people than previous month translating to a rise of 0.2% and 3.3% unemployment rate. (chart)

High import prices of food and energy are now spilling over into the prices of other products and services.

BNR says it expects no further rise in inflation over the coming two quarters and is concerned about the economic stagnation in the second and third quarters of 2022.

Hungary's industrial output picks up in June, but outlook mixed as economy set to slow down

Hungary’s industrial production grew 4.8% y/y in June, up from a 3.4% increase in the previous month.

Unemployment slightly rose in Czechia in July
11 hours ago
Moldova’s maize, sunflower crops decimated by drought
12 hours ago
North Macedonia’s annual inflation accelerates to 16% in July
1 day ago
Romania’s central bank slows down monetary normalisation cycle with a 75bp hike
1 day ago
Hungary's industrial output picks up in June, but outlook mixed as economy set to slow down
1 day ago