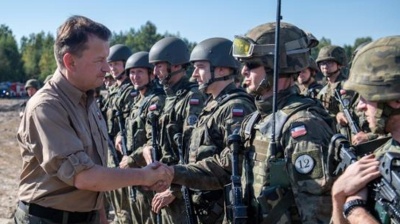 Poland plans to more than double the size of its military to at least 250,000 troops, the country’s defence ministry said on October 25.

The plan is the new initiative of Poland’s radical rightwing government led by Law and Justice (PiS) and would make the Polish Army one of the largest in Nato.

“If we want to avoid the worst, which is war, we must act according to the old rule ‘if you want peace, prepare for war’,” said Jaroslaw Kaczynski, Poland’s deputy prime minister responsible for security, and the de facto top decision-maker in the country as the chairman of the Law and Justice (PiS) party.

Other than enlarging the army, the plan – set out in a new draft bill dubbed “On Defence of the Fatherland” – assumes stepping up the modernization of the armed forces, and increasing the size of the so-called Territorial Defence, a kind of paramilitary service for civilians, to 50,000.

Kaczynski and Defence Minister Mariusz Blaszczak did not provide an estimate of the timeline for the changes nor how much they would cost.

The politicians only said that the project will be paid for by the Armed Forces Support Fund, which will be financed from the issuance of Treasury bonds, as well as bonds issued by the state bank BGK, and from the profits of the National Bank of Poland.

The financing structure will be similar to the one used by the government to keep the economy afloat during the worst of the COVID-19 (coronavirus) pandemic, Blaszczak noted.

The opposition has railed against the plan as unrealistic and taking ever more state spending outside of  parliament’s control.

Poland has long been one of the few Nato member states that spend the alliance-recommended 2% of GDP on defence. Since Russia’s annexation of Crimea from Ukraine in 2014, Poland has grown wary of the need to beef up its military potential.

First official results from Bosnian elections put nationalists ahead after exit polls predicted losses
8 hours ago
Georgian MPs want to rid the country of oligarchs, but not all of them
8 hours ago
Hungary agrees on deferred payments with Gazprom for winter gas deliveries
8 hours ago
US sanctions Russia’s CBR head Nabiullina and other officials
8 hours ago
Russia prepares for new attacks against Ukraine from Belarusian territory
8 hours ago