Over 200 arrested at “Freedom Day” protest in Belarus, but turnout was low 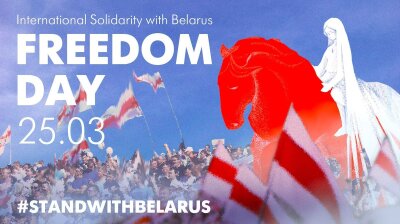 Over 200 protesters were arrested during the "Freedom Day" protests in Belarus, the first large rally of the spring season, but the turnout was disappointingly small
By Ben Aris in Berlin March 26, 2021

Belarusian police arrested over 200 protesters during Belarus’ Freedom Day demonstrations on March 25, the first big protests of the spring season, although the turnout was disappointingly small.

Demonstrators were answering the call by opposition leader Svetlana Tikhanovskaya to take to the streets in large numbers for the first time since the winter closed in on the small Republic.

"Currently, over 200 people are apprehended for violation of the legislation on mass events. Every single case will be inspected by the law enforcement. We will get to the bottom of every situation," the Ministry of the Interior spokeswoman Olga Chemodanova said in her Telegram channel.

Military vehicles were sent into the city centre to quash the scattered groups of protesters, with riot police using water cannon on demonstrators.

There are no estimates of the number of participants but it was clearly well below the tens of thousands that took to the streets last year. Reports describe small groups marching through courtyards and streets of Minsk in a tactic designed to avoid clashes with the police and wide-scale arrests like those during the massive protest gatherings of 2020.

Videos on social media showed police arresting people holding the red-and-white flags that are an emblem of the opposition to President Alexander Lukashenko. According to the activists, most people (68) were apprehended in Minsk.

In one video the veteran demonstrator Nina Bahinskaya, a 73-year-old pensioner, who has been protesting against the Lukashenko regime for years, was giving a short interview when the woman behind her was snatched by a masked security officer and bundled into a waiting van.

More than 33,000 people were arrested during last year's protests, many of them being beaten by police. Some of those arrested have been given long prison sentences, including two journalists who were sentenced in February to two years in prison for covering the protests.

“Freedom Day" is an unofficial holiday that celebrates the short life of the independent Belarusian People’s Republic that declared its independence from Soviet Russia in 1918 but the succession bid was crushed by the Soviet Red Army a few months later.

Protests have been continuous since the disputed August 9 elections last year that saw Belarus' self-appointed President Alexander Lukashenko returned by a landslide according to the official results.

With spring on its way the opposition leaders, now almost all living in exile, have promised to restart the weekend mass protest that saw up to 200,000 people take to the streets every Sunday before the freezing weather arrived.

The protests come as the Belarusian government cracked down on a group representing the country's Polish minority. Several top leaders of the Union of Poles in Belarus were arrested on March 25 for inciting social hatred. A day earlier the head of the group, Andzelika Borys, was arrested for violating mass gathering rules, Deutsche Welle reports. She has been charged with inciting social hatred, a charge that carries up to 12 years in prison if convicted.

Poland has been a vocal supporter of the opposition and pushed for EU sanctions on Lukashenko and his entourage almost as soon as the protests broke out last Augusts. Poland has also offered sanctuary to Belarusians fleeing Lukashenko’s brutal crackdown.

The Baltic states of Lithuania, Latvia and Estonia have also been ardent supporters of the opposition and implemented new sanctions against Belarus on March 25 targeting over 100 Belarusian officials with travel bans.

More protests are scheduled for Saturday as the opposition attempts to rebuild the protest momentum. However, the smaller crowds make it is easier for the authorities to crack down on demonstrations and they have used violence and intimidation to try to prevent the large crowds coming on to the streets that overwhelmed the security services for most of the weekend demonstrations last year.