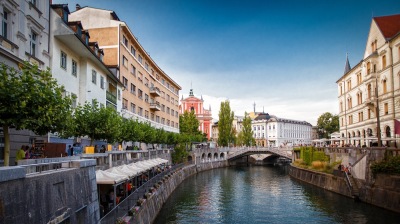 Slovenia experienced several months of deadlock following the 2018 general election, that was finally resolved as comedian-turned-politician Marjan Sarec managed to cobble together a five-party minority coalition.

With the government now in office, the political situation is expected to be less fraught in 2019 — as long as the coalition holds together. There is still a chance that crisis situations could put it at risk.

The coalition, which holds only 43 out of 90 seats in parliament, is made up of the List of Marjan Sarec, the Social Democrats (SD), the Modern Center Party (SMC) of former prime minister Miro Cerar, the Alenka Bratusek Party (SAB), and the Democratic Party of Pensioners of Slovenia (DeSUS). It is unofficially backed by left wing Levica.

The hangover from the controversial 2013 bail-in of major banks continues to colour Slovenian politics. Central bank governor Bostjan Jazbec resigned in March 2018 after receiving death threats that he believed were related to the bail-in. MPs rejected a proposal to replace him with acting governor Primoz Dolenc, saying they want to break from the past, and are seeking someone who is committed to probing the bail-in. Finally, the parliament approved economist Bostjan Vasle to head the central bank in December.

Slovenia’s economy is expected to continue its expansion in 2019, supported by domestic demand, but growth will fall to a slower pace than in 2018, moderating as the economy reaches its potential. Negative risks stem from weaker demand from Slovenia’s main trading partners.

The Slovenian economy resumed growth in 2014 after it contracted for two consecutive years. In the third quarter of 2018, GDP expanded 4.8% y/y. For full 2018, the European Commission (EC) expects 4.3% growth, while the International Monetary Fund (IMF) has said it sees the GDP expanding 4.5%.

The EC sees Slovenia’s GDP expanding 3.3% in 2019, while the IMF and the OECD have forecast growth rates of 3.4% and 3.6% respectively. The European Bank for Reconstruction and Development (EBRD) expects 3.3% GDP expansion in 2019.

Private consumption will continue to be supported by rising wages and employment, while investment will be backed by increased use of EU funds.

The slowdown compared to the previous year is a result of not only the gradually weaker growth in foreign demand, but increasingly as a consequence of demographic factors, i.e. a decrease in the working age population.

The workforce shortage experienced by Slovenia in common with its neighbours in Central Europe is set to continue in 2019, as the unemployment rate declines further. According to the EC, it will fall to 5.3% from an expected 5.6% in 2018.

According to the ManpowerGroup Employment Outlook Survey, released on December 11, Slovenian employers reported upbeat hiring intentions for the January to March 2019 period. The strongest labour market is anticipated in the wholesale and retail trade sector and mining and quarrying. Due to labour supply constraints, wage pressure is expected to increase.

Slovenia sold €1.5bn of a 10-year benchmark bond issue in the opening days of 2018, to strong demand. Towards the end of the year there was another landmark event: local SID Banka issued a €74mn on the international capital market, a first for the country.

Slovenia is expected to continue to post a general government surplus. However, it should decrease to 0.4% of GDP in 2019 from an expected 0.5% of GDP in 2018, according to the EC.

“The main downside risks to public finances over the forecast horizon stem from considerable expenditure pressures, particularly on wages and social benefits,” the EC has said.

Public debt will remain high, but it is expected to continue its decline in 2019, hitting 66.3% of GDP, according to the EC.

One of the government’s most important tasks for 2019 will be to continue the privatisations of major banks, a politically sensitive issue.

In 2018, Slovenia’s largest bank Nova Ljubljanska banka (NLB) was listed in an IPO in Ljubljana and London, after a failed attempt in 2017. The government of Slovenia sold 59.1% of the bank in the IPO.

Selling off stakes in NLB and other major banks was part of Slovenia’s commitments to the European Commission when it approved the bail-in of several Slovenian banks back in 2013. Ljubljana has also committed to the European Commission to privatise Abanka, Slovenia’s third largest banking group, within 2019. In October 2018, Slovenian Sovereign Holding invited interested investors to submit expressions of interest in the acquisition of its 100% holding in Abanka.

Slovenia remains an attractive location for investors in the manufacturing sector, including high-tech investors. The €24.6mn robotics plant Japan’s Yaskawa is building in the Slovenian town of Kocevje will become fully operational in the second half of 2019. Production at the Slovenian plant will meet around 75% of demand from Europe, Middle East and Africa. The company also plans to open a research and development centre in Slovenia, which will work with local universities and research institutes.

Investors hot for corona Eurobond issues from Southeast Europe
2 days ago
LONG READ: The Growers - a handful of countries in New Europe are coping with the coronacrisis and are still expanding
9 days ago
Foreign share of Ukraine's domestic bonds falling, demand for fresh debt spluttering
7 days ago
Russia’s VTB trapped in a London lockdown until 2024
7 days ago
Movie night at the airport
12 days ago