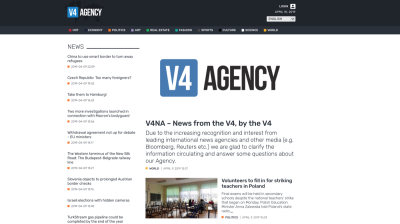 Hungary PM Orban has sets up an analogue to Russia Today called the V4 news agency, based in London
By bne IntelliNews April 10, 2019

Arpad Habony, the former media advisor of Prime Minister Viktor Orban, has set up V4 News Agency (V4NA) headquartered in London with teams in the four Visegrad countries and five other European capitals, local media reported on April 9. Hungary’s ambassador to the UK Szalay-Bobrovniczky will also have a stake in the company.

The new agency is tasked with casting Hungary and Orban in a more positive light internationally. Habony was part of the largest media owners in Hungary before he and others transferred ownership in the companies to a centralised media conglomerate (CEPMF) comprising of some 500 pro-government outlets in November.

Habony has made headways in helping Fidesz establish a presence in the tabloid media and he set up print and internet tabloids. Habony’s name emerged in the Gruevsky scandal. His associates acquired ownership in right-wing media in Macedonia.

Viktor Orban channelled a vast amount of public money to build up a media conglomerate loyal to him after former party cashier Lajos Simicska turned against him in 2015.

Today, print and broadcast media is overwhelmingly pro-government financed by what seems to be an unlimited amount of state money through ads and sponsorship. State media has also become government mouthpiece and an effective tool for the ruling Fidesz to discredit opposition and critics. The government has yet to conquer online media. However, Orban has little influence over how Hungary is portrayed in the rest of Europe – usually in very critical terms.

Domestically the largest and most popular political websites remain independent. Most of them, however, have turned to readers asking for donations, as the revenue stream from ads alone may not be enough to keep them above water.

Registered and headquartered in London (UK), V4NA covers the life of Europe and the world from the V4 perspective, according to the short summary of the news agency as it appeared on its website. V4NA will publish news around the clock in English and Hungarian at the beginning with plans of adding French and German to its portfolio.

The news agency has teams in London, Brussels, Paris, Berlin, Prague, Budapest, Belgrade, Bratislava, Warsaw with a staff of 50 at the start.

New Wave Media Group, the company which runs Hungary’s second largest online news website Origo.hu, has 57% of the stakes in the company. Danube Business Consulting, set up by Habony and late PR consultant Arthur Finkelstein owns 40% and the remaining stakes are held by Hungary’s ambassador to the UK, Kristof Szalay-Bobrovniczky.

According to local media, the V4NA’s goal will be to push the V4’s and especially Viktor Orban’s agenda on migration and other issues that divide the EU's western and eastern states. One of their first stories of V4NA aims to uncover the relationship between George Soros and the EPP.

Citing "a document found in the hallways of the European Parliament", it writes that EPP and the Open Society Foundation's European Policy Institute, founded by George Soros, have organized a joint orientation conference on Libya's wartime economy.

Violent clashes with police at thousands-strong anti-lockdown protest in Belgrade
5 hours ago
Belarus presidential election to have no outside observers, opposition may united by a single candidate
12 hours ago
US intelligence memo admits there is “no evidence” of Russian payment of bounties to Afghans for killing US soldiers
17 hours ago
The bubonic plague has swapped its rats for marmots in Mongolia where two cases reported
21 hours ago
Romania’s Blue Air goes from flying high to seeking debt restructuring
22 hours ago