Orban and Salvini united against migration at Budapest meeting 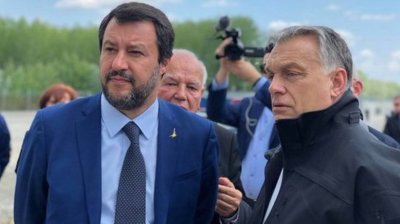 Hungarian Prime Minister Viktor Orban and Italian Deputy Prime Minister and Minister of the Interior Matteo Salvini agreed to defend EU's borders and to stop migration to the continent during their meeting just three weeks before the European Parliament (EP) election on May 2.

The head of Italy's League party, whom Orban called a hero for his efforts to stop illegal immigration, first met his Hungarian counterpart, Minister of Interior Sandor Pinter, then visited the southern fence at the Hungarian-Serbian border.

While their political parties come from different families, it’s clear that the two leaders see eye-to-eye on some important fundamental issues: the importance of preserving Europe’s Christian heritage and culture, the question of border protection, and the problem of illegal migration, government spokesperson Zoltan Kovacs wrote on his blog.

At the press conference the Hungarian prime minister said both sides believe that there will be no strong Europe without strong and successful nation states. Salvini said Europe does not need a redistribution of illegal immigrants but a Europe that can defend its borders on land and on sea.

Orban has outright rejected the idea of the migrant relocating scheme. Although migration to Hungary has become virtually non-existent, the Oban government extended the migration state of emergency introduced three years ago, at the height of the migrant crisis. It erected a razor fence at the southern border of the country. Orban expressed his grievances that Hungary spent over €1bn on the fence without receiving money from the EU in return.

He also noted a Hungarian proposal for the establishment of a new body of Schengen interior ministers that would be charged with handling migration policy.

The EP election programme of the ruling Fidesz party calls for stripping Brussels of power on issues concerning migration.

Hungary’s illiberal prime minister has turned the European parliamentary elections into a referendum on migration and the future of Europe. He has previously expressed his hope that anti-migration forces would get a majority in all EU institutions from the Parliament to the Commission after the May 26 election.

The issue of immigration is one of the greatest challenges that Europe has ever had to confront, Orban said in his interview published in La Stampa on Monday. The issue, the PM has said several times, will turn upside down the traditional divisions and alliances in European politics, he said.

Although he remains a member of the European People's Party (EPP) after avoiding an expulsion, Orban has openly flirted with eurosceptic forces. In the interview with La Stampa he called for the first time for cooperation between the centre-right EPP and radical parties, an idea shunned by EPP leaders.

At the press conference, he again urged the EPP to be open to cooperation with parties to its right, such as Italy’s ruling League party. Europe needs an alliance of anti-migration political forces, he said, adding that Fidesz remains in minority within the EPP with its views.

When asked about his party's future in the EPP, Orban said it will depend on which direction the conservative group turns after the May 26 election. “If the EPP ties itself to the European left, that’s a cooperation where we have a hard time finding our place,” he said.

German news agency DPA quoted Markus Soeder, the governor of the southern state of Bavaria, saying Orban's meeting with Salvini was "the wrong signal" to send following Fidesz's suspension from the EPP.