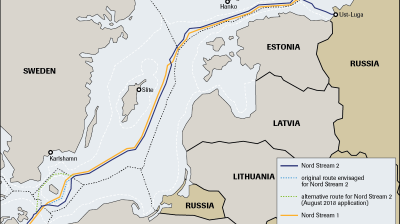 Russia has finished filling the first string of the Nord Stream 2 with natural gas, meaning that the pipeline is now technically ready to operate. But there is still no clarity on when the pipeline will start pumping commercial volumes of gas to Europe, as first it must be certified by German regulators.

“The gas-in procedure for the first string of the Nord Stream pipeline has been completed,” the Gazprom-owned Nord Stream 2 operating company announced on October 18.

The string has been filled with 177mn cubic metres of so-called technical gas, Nord Stream 2 said, bringing its pressure to 103 bars.

“This pressure is sufficient to start gas transportation in future,” the operator said. “Pre-commission steps for the second string are ongoing. Nord Stream 2 will inform about further technical steps in due time.”

Germany’s energy regulator Bundesnetzagentur is the process of deciding whether to certify the Nord Stream 2 company as an independent transmission system operator, even though it is fully owned by Gazprom, which will also supply 100% of the gas that runs through the pipeline. Under an EU amendment that came into force last year, pipelines linking the bloc with third countries, like Nord Stream 2, must comply with EU rules on unbundling and third-party access.

Bundesnetzagentur has until early January to reach a draft decision on certification, and this decision will then be passed to the European Commission for review. The EC has recently reiterated that EU rules must apply to the pipeline.

Germany’s economy ministry said on October 15 it had consulted with neighbour states about issues of gas supply security as part of the Nord Stream 2 certification process, according to Reuters. After completing its assessment, the ministry will recommend whether Bundesnetzagentur should certify the pipeline’s operator or not.

“By the end of next week or the beginning of the week thereafter, we will look at the replies and we will inform you of what kind of recommendation will be dispatched to the regulator,” outgoing economy minister Peter Altmaier said.

A number of Germany’s neighbours oppose Nord Stream 2 on energy security grounds, most notably Poland. The latter’s state-owned PGNiG said in September that it would take part in the pipeline’s certification process.

Following elections in late September, a new German government is set to be formed shortly, led by Social Democrats leader Olaf Scholz. While the Social Democrats have spoken in favour of Nord Stream 2, they are hoping to form a coalition with the Green Party, which is staunchly opposed to the pipeline.