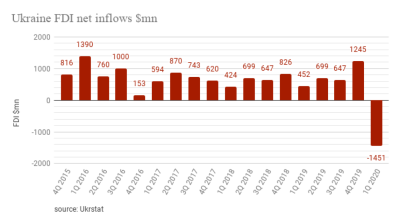 A total of $1,451mn of FDI left Ukraine in the first quarter of this year, followed by another $360mn in May as the investment case sours
By bne IntelliNews July 5, 2020

Ukraine has been attracting foreign investment but at disappointingly low levels. New FDI in 2019 was $1.9bn, the State Statistics Service said. About one quarter, or $506mn, was from Cyprus, presumably offshore Ukrainian or Russian money. The next four sources were: Russia – $396mn; the Netherlands – $262mn; The United Kingdom – $212mn; and Germany – $119mn.

The only sector to attract substantial FDI has been the renewable power sector, which has seen more than $4bn of inflows in the last two years to take advantage of the attractive tariff regime. However, the government has undermined confidence in the sector after it decided to reduce the tariffs, to the outrage of investors. A compromise was struck in June, but the investors remain unhappy and some are still contemplating taking their complaints to international arbitration.

The investment case for Ukraine has been in decline since Ukrainian President Volodymyr Zelenskiy shook up the government with a major reshuffle on March 3, which included the sacking of the technocratic Ukrainian Prime Minister Oleksiy Honcharuk.

The arrival of the coronavirus (COVID-19) epidemic has only undermined the case for investment further. And Ukraine’s image took a fresh blow with the governor of the National Bank of Ukraine (NBU) Yakiv Smolii’s unexpected decision to quit on June 2, citing “systematic political pressure” as the reason for his departure.

In May there was a fresh $323mn net outflow of FDI that followed on from an inflow of $360mn in April.