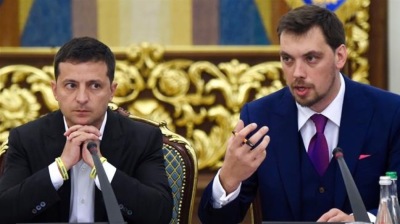 Ukraine's parliament, the Verkhovna Rada, has accepted the resignation of the nation's Prime Minister Oleksiy Honcharuk after the premier submitted his resignation letter on March 3.

The motion to accept the resignation was supported by 353 lawmakers on March 4 at a special session of parliament called by Ukrainian president Volodymyr Zelenskiy.

Honcharuk’s deputy, Denys Shmyhal, was promoted to take over as acting prime minster and lead the cabinet.

Honcharuk, 35, was installed as Ukraine’s youngest- ever prime minister to oversee an ambitious economic reboot, but economic growth and investment have underwhelmed and recent opinion polls show Zelenskiy’s popularity and that of the government beginning to slide. Some commentators say that Zelenskiy’s bet on “rookie” politicians that were supposed to be the new clear broom to sweep the old corrupt system away has not paid off. Now Zelenskiy is talking about hiring not just clean officers but also ones with experience, indicating some familiar faces from the previous regimes of former President Petro Poroshenko, Viktor Yanukovych and Viktor Yushchenko are likely to reappear.

Oleksandr Kornienko, the president’s party chief, said before the changes were announced that the shuffle won’t mark the end of the “new faces philosophy.” Incoming officials, though, will need experience managing state-run or private businesses.

“Trust in the president remains, and there’s trust in his economic and social program,” he said. “We have very nice goals for the government but in some spheres it’s been chaotic.” The move followed weeks of controversial reports about possible the dismissal of Honcharuk thanks to his deteriorating relations with Zalenskiy, who is also under pressure following poor popularity poll results.

At the same time Honcharuk has clashed with oligarch Ihor Kolomoisky who is believed to have played a role in ousting Honcharuk. The PM backed a bill that would have made it illegal to return a bank to its former owner if that bank has been nationalised. Kolomoisky has been lobbying to get back his Privatbank that the government nationalised in 2016.

Honcharuk also approved a government decision to sack the management at top utilities company Centrenergo, but the new team were physically barred from entering the company offices at the weekend. Kolomoisky was reportedly in control of the previous management team and the government intends to privatise the attractive power generator.

Other top officials were also replaced in a reshuffle that has been expected since February when Ukrainian media reported that Zelenskiy intended dismissing the country's pro-Western Foreign Minister, Vadym Prystaiko, amongst other names.

On January 17, Honcharuk said he had filed the letter of resignation to the president in order to prevent any speculation about disrespect of government members for the chief of state. The PM added, however, that he and his cabinet were going to work "as usual" until Zelenskiy had taken "a political decision". Under the Ukrainian constitution the Rada, not the president, has the authority to sack the prime minister. Honcharuk’s decision to send his letter to Zelenskiy and not the Rada deputies smacks of political theatre.

The first letter followed a scandal after a leaked tape showed Honcharuk making disparaging remarks about Zelenskiy competence and lack of economic knowledge. The recordings were of a classified government meeting at the central bank that were posted on the Telegram social media platform on January 15. Honcharuk’s comments were made during several meetings with Ukraine’s top economic officials, including the National Bank of Ukraine's (NBU's) first deputy governor Kateryna Rozhkova, NBU deputy governor Dmytro Sologub and Finance Minister Oksana Markarova.

On the March 3 meeting, Zelenskiy proposed selecting Denys Shmyhal as the new PM, not just acting, as had been previously reported by local media. Several lawmakers leaked the discussed nominees to the Ukrainska Pravda online outlet this week.

Another victim of the reshuffle was Ukrainian Finance Minister Oksana Markarova, who is seen by Ukraine’s donors as a competent pair of hands, although the government has been struggling to meet the budget plan as revenue collection has been behind target this year and last year.

“I feel sorry for Oksana Markarova. She did a stellar job in running public finances - managing a record low in Ukraine’s overseas borrowing costs as foreign investors trusted her,” said Tim Ash, Senior Sovereign Strategist at BlueBay Asset Management. “She also helped manage the difficult portfolio of state owned banks, including state interests in the Privatbank case. Maybe that did for her in the end, which must now be a concern in terms of future relations with the IMF, markets and investors.” Earlier reports say that the IMF team that was in Kyiv last week has still not reached an agreement with the IMF on the new Extended Fund Facility (EFF) for $5.5bn and provisions in the new banking law that forbids returning banks to their former owners is the problem. The law allows for the payment of some compensation to the former owners, according to reports, something the IMF team won’t accept. Kolomoisky has been asking for either the return of Privatbank or the payment of at least $2bn.

Markarova is likely to be replaced by Ihor Umansky, who has served as the deputy minister of finance in the past.

“He likely knows where some of the skeletons are hidden but a concern is that he never showed himself as a proven reformer - more managing the status quo. Maybe that is what Zelenskiy now needs,” says Ash.

The change of finance minister will unsettled the holders of Ukraine local debt as international investors have sunk some $5bn into the local debt market in the last year. However, as a former finance ministry official Umansky will not worry them too much, say experts. Umasnsky served in governments in 2009 and 2014-2015 under Prime Minister Yulia Tymoshenko and Poroshenko.

“If bond holders hit the exits it could get ugly very quickly with a large number of investors trying to get through a very small door in an over positioned trade. And under the new management it is unclear whether the NBU (which might also see HR changes) would be encouraged to provide liquidity to ease the process. Rather oligarchic interests likely will have more interest in securing a more competitive UAH albeit that would be at the price of higher borrowing costs. Not sure Zelenskiy gets all this,” said Ash.